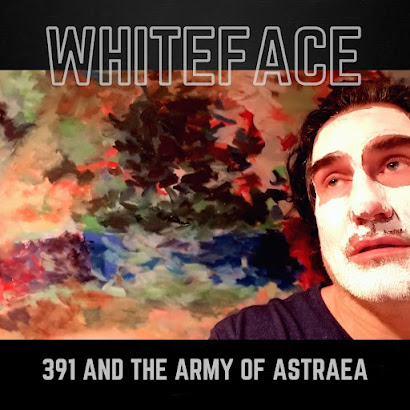 Welcome to, or back to, the meek yet mighty Gauntlet of Balthazar for yet another New Release Tuesday featuring a 391 & the Army of Astraea audio release in the "From the Recording Studio" category.

Today's issue is a six-track Instrumental Extended Play "Maxi-Single" that has been asininely titled "Whiteface" (featuring, btw, a rare personal cover image - artistic though it might be). Musically the recordings combine Industrial (Whiteface Introduction), Classical Crossover (Whiteface Microsonata), Middle Eastern Modes (Bronze Age Collapse), Electronic (Tiger Lily), Jazz-Tinged Progressive Rock (The Day Before the Day After), and Italian Folk (Tarantella Opus 14 Number 8). Overall, it was written, recorded, and mixed, very swiftly over the end of summer, and particularly after the release of the last 391 & the Army of Astraea full-length album, "Five Year Plan".

Thematically, the content was mainly inspired by the uncomfortable history of objectifying (and often contradictory) notions of race and culture as presented in past and contemporary popular media. Obviously, "whiteface" is the inverse of the turn of the 20th century vaudevillian "blackface" phase of media-race history, yet, the fact that "whiteface" is a surreal concept, or could be thought of as far more "acceptable" than blackface, should be explored.

Likewise, the tracks address the simplicity of the black-white duality, as well as where "whiteness" ends, and ergo, is "whiteness" a cultural mask which so-called "off-white" people (i.e. Jews, other Middle Easterners, Italians, etc., and even sometimes Far-Eastern Asians), have been encouraged to don? This phenomena can be seen in images promoted in popular media such as shifting standards of beauty and the dominance of certain rhythms in musical trends. So, nose jobs, lip size, skin shade, and of course, the "africanization" of global popular music starting in the late nineteenth century.

Admittedly, it seems like most of the recent Gauntlet posts have been music oriented, with not so much other content lately. But it takes a lot of time to conceive of new series and pen numerous scripts, in addition to working on music. But to summarize politics: Biden still is the corrupt figurehead of a party and people with good intentions who have no actual plan of how to make their internal notions of utopia manifest in reality without destroying the world (and villainizing their political opponents). Please people, do some math before you try to replace fossil fuel overnight! The ends do not justify the means if millions of people around the world freeze to death this winter. Likewise, supporting Ukrainian independence is not worth nuclear war, and we all know that.

Anyway, I hope you give "Whiteface" a listen (the embed is below), and if you can, please follow 391 & the Army of Astraea on Bandcamp, check out previous releases, and share it with others who you feel might appreciate such fare.

Take care and stay free. Till next time.