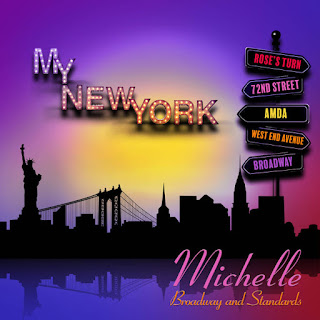 It seems as if this month is already shaping up as a big music release period for 391 & the Army of Astraea, yet I have one other project that I'd like to to introduce to all the Gauntletarians out there that I actually had very little to do with, other than setting up the Bandcamp page and profile.

As I said, this is a great departure from the usual industrial-electronic film soundtrack and experimental ditties that I normally upload here, simply because this full length album is a recently completed collection of spiffy Broadway Standards called "My New York" by Michelle Rosenblum, which along with the stellar opening track, features the cutest duet with my daughter Amalia on track nine. Both are conveniently embedded below, but sure, let the album play all the way through.

Regardless of the departure from the Gauntlet's normal style and timbre, I hope it is greatly enjoyed.

Email ThisBlogThis!Share to TwitterShare to FacebookShare to Pinterest
Labels: Music