From the Writer's Studio: Danger, Will Robinson! Lost in Space, Again - the Review 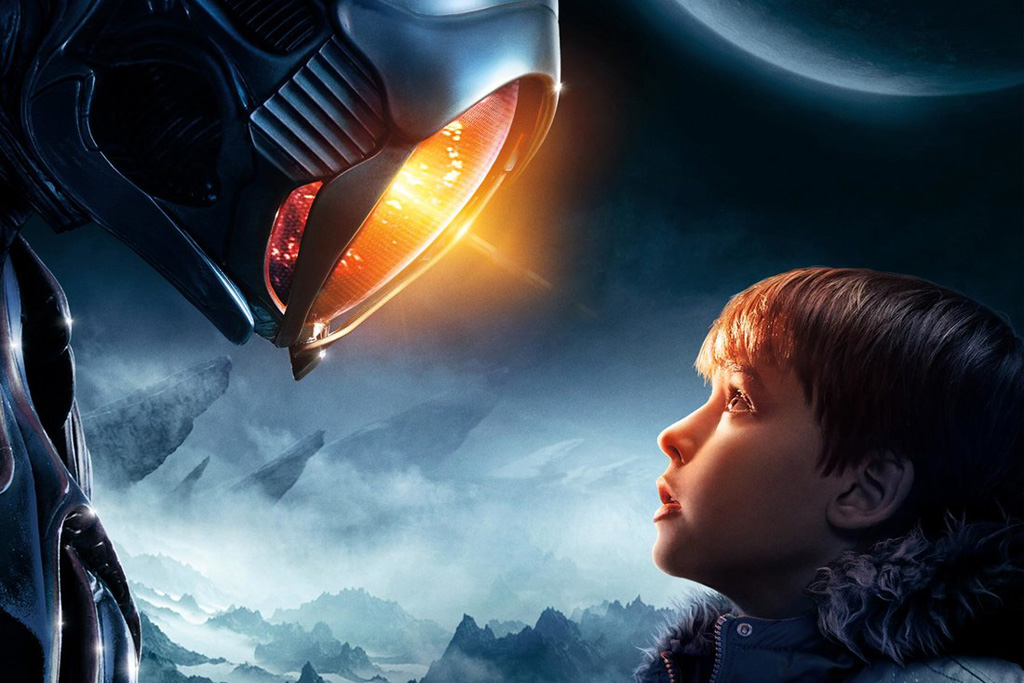 Okay, okay, I'll admit it that I got sucked into this one due to my own childhood nostalgia, but there are some really nice things about Netflix's brand-spanking new reboot of the classic (mostly daffy) 1960's prime time science fiction series Lost in Space.

So, as usual in the "From the Writer's Studio" feature of the Gauntlet, let's take a look at the original series and compare what innovative and / or predictable or political changes the new series has made to that original template. 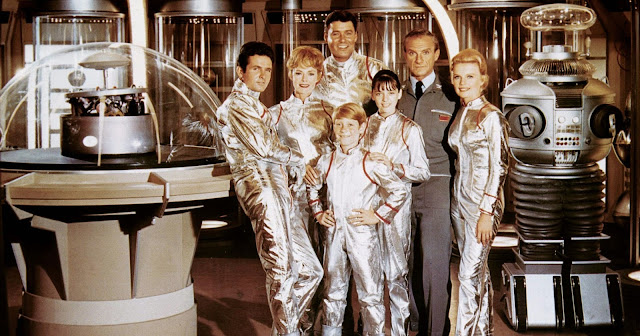 According to the rather concise Wikipedia page on the subject: "Lost in Space is an American science fiction television series created and produced by Irwin Allen. The series follows the adventures of a pioneering family of space colonists who struggle to survive in a strange and often hostile universe after their ship is sabotaged and thrown off course. The show ran for three seasons, with 83 episodes airing between 1965 and 1968. The first season was filmed in black and white, with the second and third seasons filmed in color."

The premise of the original series (as well as the content of the much later unveiled and never aired original pilot episode) actually leaned fairly to the dark side for a piece of its sort at the time. This sinister quality was reflected mostly in the first season (and parts of the second), where the on-board antagonist, narcissistic psychologist Dr. Zachary Smith launched into recurring forays of oblique sabotage that was insidious, unforgivable, and malevolent. Yet, the Robinson's always found it in their collective hearts to not leave him behind.

Admittedly, in league with external villains (often played by guest stars) this worked fairly well in the non-episodic "monster of the week" format of mid-late 1960's prime time television, but we can only assume that network executives wanted "more lovable" characters, and so, Dr. Smith quickly became a caricature of himself, and was morphed, (with amazing verve by veteran character actor Jonathan Harris I might add) into a conniving, mischievous coward, whose antics became almost comical in both their tactics and their predictability. Regardless, without the proactive schemes of the Dr. Smith character, almost none of the action within the original series would have moved forward. 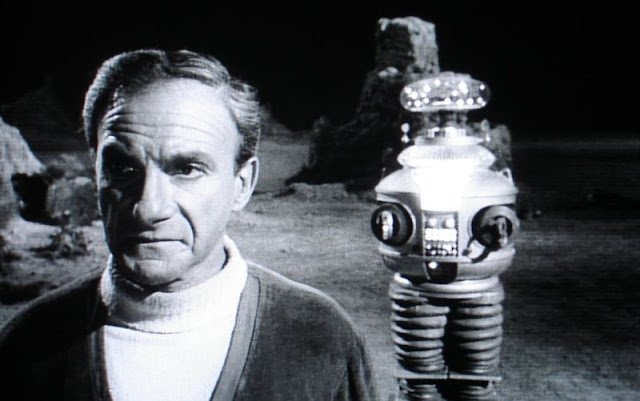 The rest of the cast were in many respects archetypes of the time, and not surprisingly they were, excluding Dr. Smith; the military pilot, Major Don West; and the Robot, one family unit, similarly to contemporary popular television westerns like Bonanza.

We had the father turned able Captain, Dr. John Robinson, who led the way. The supportive wife, Dr. Maureen Robinson, who served as the conscience of the crew. Their beautiful and compliant older daughter, Judy Robinson, who filled the post as the erstwhile and ever unrequited love interest of the otherwise secondary male protagonist, Major West. And lastly, we had the dual child prodigies, Penny and Will Robinson, who invariably presented the clever solution out of whatever quandary the crew had encountered earlier in the episode, and of course, in the nick of time.

Bouncing endlessly from earth-like planet to earth-like planet, the Robinson family and their "guests" always sought to get back home, only to somehow miscalculate their trajectory, encounter strange phenomena, and of course, stumble into a new adventure.

As an over-arching critique I am, in general, mostly adverse to reboots, and I tend to view them as a sad manifestation of the entertainment industry's failure to explore news artists and to produce new and innovative franchises, in league with their penchant to capitalize on "safe" pre-existing market bases. 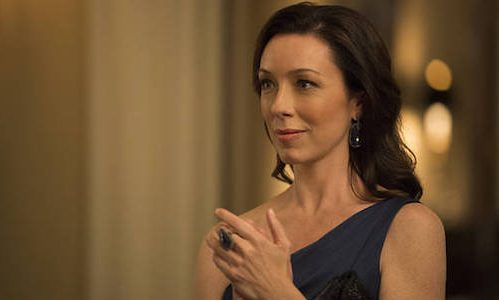 Saying that, I absolutely and totally adored Ron Moore's Battle-Star Galactica 2004 Redux, which I still regard not only as a great update of a beloved classic series, but as a truly complex, wonderful and ground-breaking stand alone science fiction series.

Now, I'll be the first to admit that my reticence and perennial dislike of reboots may be personally motivated - a pet peeve of a screen-writer who has designed several series that I perceive could be very successful both artistically and financially, but are as yet still un-produced. But, suffice it to say, my vexation is still probably best encapsulated in the oft overheard complaint, "Hey, can't those guys in Hollywood ever come up with new stuff?"

Well, while there may not be that many totally ground-breaking ideas in the new Lost in Space, created by Matt Sazama and Burk Sharpless, of "Dracula Untold" fame, I have to say that it does bring some nice new touches to the table.

So I guess the operative question is: what are those nice new touches?

First and foremost, the relationship between John and Maureen Robinson is much more strained, and one might argue, much more realistic, and is reflective of real world issues. This is very contemporary and serves as an obvious counter to the asexual patriarch-matriarch paradigm of the original. These nuances of rejection, abandonment, past joy, career priorities, and the simmering power dynamics of their relationship is subtly underwritten in dialogue between the characters, and is remarkably voiced by talented actors Toby Stephens and Molly Parker. 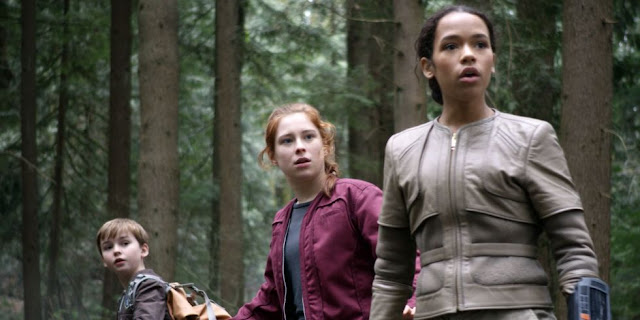 While this is hyper-realistic, this is also playing both sides of sexual politics, in that, by crafting Maureen as essentially the lead as well as the scientifically brightest character, it appeases the feminist in all of us, yet, when push comes to shove in times of stress, the less brainy, more brawny, male characters are the ones to grab the nearest knife and kill the present threat ala caveman etiquette as the girls standby and shriek.

In essence this is destroying a series of gender stereotypes, while promoting another gender stereotype, an almost ancient one, for better or worse. But as I said, it's not without its realism.

Regardless, achieving this sort of balance is not an easy road to hoe, and I suspect that there may be some confused blow-back on the social justice media front.

Then again, when isn't there?

The two girls, Judy and Penny, unlike in the original series and in the feature film (which is best left for a whole other analysis), are much closer in age and are much more overtly competitive with one another. Also, John is presented as Judy's Step-Father, which aside from the realism of a less than archetypal family structure, is a minor element that may be presented as a component in the sister's dynamic later, but hopefully not, as a race card would be a low hanging fruit, and would be a "low context" issue, which is why the subject was delicately broached by out-family group character Don West. They are played respectively by Taylor Russell and Mina Sundwall, who are both really excellent young actors. 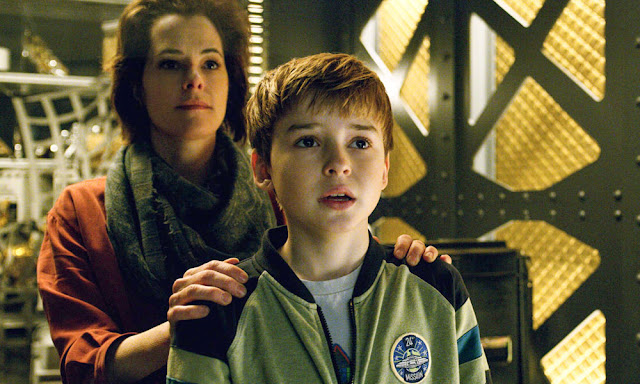 Young Will Robinson is still as naive as he was in the original and is now played by diminutive Maxwell Jenkins. Yet, he is also presented as not as capable as his character was in the original, to the point where (warning: minor spoiler ahead) his mother orchestrates a system hack in order for him to pass the test to be included on the mission. This entails that his dynamic strongly relies on an "overcoming adversity despite deficits" motif that depicts him as an underdog which the viewer will associate with rooting for the triumph of human nature over empirical data. Sadly, many contemporary screenwriters (probably unconscious victims of third stream feminism) feel that not only must they bump up the abilities of female characters, they must also present males as deficient in some respects. But, I digress.

This brings us to Major Don West, or now just Don West (I don't think they've mentioned his rank yet), who is snarkily played by Argentine-born actor Ignacio Serricchio. He is a little more Han Solo than his antecedent, and his fulcrum rests firmly on the overt mercenary / selflessness paradigm that has driven the arc of many the anti-hero in film and television history. Still, very fun to watch.

The robot is very contemporary in design and carries with it a much more overt fascination / fear component than was implied in the original. As a agent of, we can assume, an insect-like alien life form, it attacks the human colonists, and in essence causes the failure that maroons the Jupiter missions. I say missions, since the Robinson's ship is but one of many downed colony ships on the same alien planet, where the episodic story-line continues. This of course means that the extended cast is larger, which leaves room for future conflict, unless they go all "Terranova" on us. 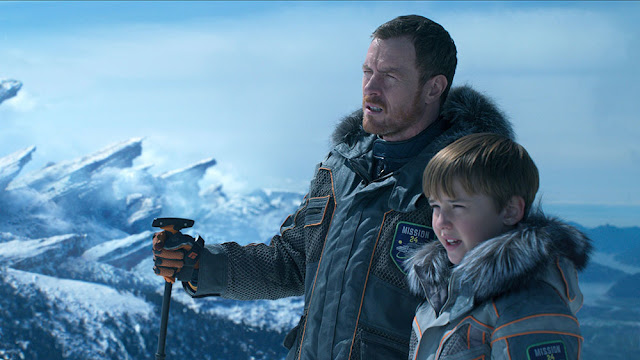 Visually the practical effects, ship wreckage, vehicles, and the Vancouver location sets, as well as the large amount of discernible CG, are all top of the line, and clearly, no expense was sparred. The direction is standard yet quite nice, and the sporadic use of flashbacks, even far into the episodes, is plied as a useful tool to explain story notes in the present.

Also, the re-working of the original John Williams theme is pretty cool.

Saying that, I do have some visual design problems with the outing, the primary of which is the contemporary look of the series on earth. Everything is essentially 2018, and aside from the fact that there has been some mild environmental upshot from a meteor impact, all of the technology presented is virtually identical to ours. Cell phones are the same. Military hardware is the same. Retail stores are the same. People sit around listening to music from the 1970's. Yet aside from a few predictable references to "the death of books", we are led to believe that even though it seems exactly like our world, we have also built a fleet of light year-traversing capable space craft.

This is not how technology works. Engineering innovations and design changes effect society on a whole, and we evidence this as we see the inhabitants of small Indian villages popping out their iphones. I personally like to call this writing / production failure "the Surrogate Effect", named so after the otherwise well-written Bruce Willis film, which posited a global robot revolution, but also presented no visible effects of that revolution on any other aspect of society. Utter nonsense.

So to sum up, aside from a minor complaint about the reality in general, all in all I have to say that I like the new Lost in Space very much and look forward to seeing more.

Four out of Five Gauntlet's up!