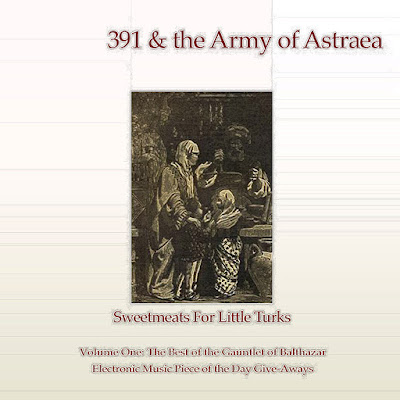 Welcome back to the Gauntlet of Balthazar for what appears to be yet another brand spanking new music release.

However, this time rather than embedding an issue of a single track, it's a compilation album of the very best of the Bandcamp hosted 391 & the Army of Astraea Electronic Music Piece of the Day Give-Away's. To make a firm distinction this release has been slated as first and foremost a "SoundCloud" first debut.

"Sweetmeats For Little Turks" is the name of the collection, and if that moniker's deceptively overt meaning perplexes you, then there you have it. But to slightly demystify, the cover art is taken from one of my very favorite late-nineteenth century dog-eared books of travelogue etchings.

The album contains what I feel are the top twenty most "successful" tracks of the fifty or so that have been issued in the series thus far, and to wit, the collection is sub-titled as "Volume One" simply because I expect that future releases will continue to be forthcoming.