From the Writer's Studio: What We've Learned So Far From "Star Wars: The Mandalorian"

Well, it's been quite a while since I reviewed any media here on the Gauntlet of Balthazar, so as a follow-up to my previous deep forays into the Star Wars universe, i.e. http://www.gauntletofbalthazar.com/2018/03/from-writers-studio-personal-freedom-in.html and http://www.gauntletofbalthazar.com/2018/01/from-writers-studio-star-wars-mythos.html, I think the debut of the first ever live action Star Wars series, "The Mandalorian", on Disney+, deserves some attention.

So let's dispense with formality and get started with the deconstruction, shall we.

Episode One: The Creative Team 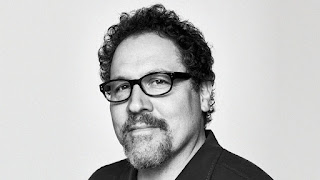 I believe I should start with a mention of the two brains behind the operation; which are Jon Favreau and David Filoni. 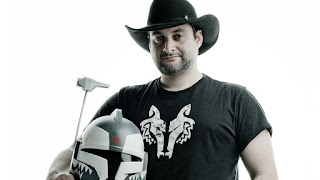 The prior is an able comic actor as well as a swell action writer who has penned several Marvel films. The latter has been the guiding hand of pretty much all of the Star Wars animated series. While I'm no animation buff, I can not offer enough praise about the writing merits of both "The Clone Wars" and "Star Wars Rebels" series.

As an aside I should mention that I have never commented on the most recent of the Filoni-driven animated series, "Star Wars Resistance", because it deserves as little commentary as possible, as it is one of the most unbearable pieces of writing I have ever seen in my life.

In brief, "Star Wars: Resistance" features a so-called "protagonist" who is by far the least interesting character ever designed in the Star Wars universe, and certainly within the series, with events occurring around him, or in hearsay, and happening to much more compelling individuals. Now I know that one might contest my critique by pointing out that Filoni's goal of that particular series might have been to illustrate that even "an average Joe" could contribute to the cause of fighting against the evil Galactic Empire, but this is just not enough, for me at least.

Missing is writer Simon Kinberg, whose even darker sensibility flavored Star Wars Rebels, as well as "Legion", and the X-Men franchise including the downright dismal "Logan".

But onto brighter pastures as the Mandalorian is a very, very, different sort of tale. 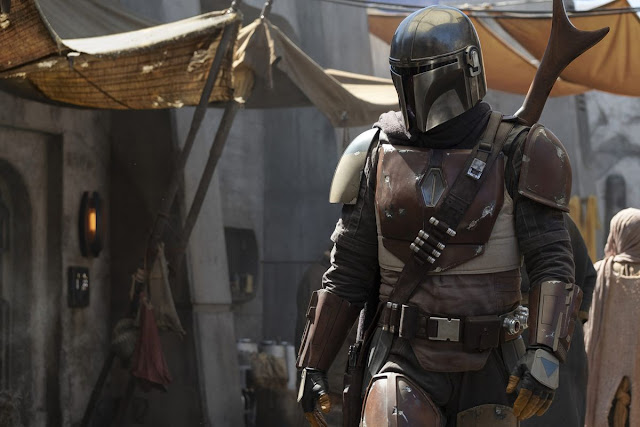 Firstly, The Mandalorian is structurally a classic Western...full on.

The protagonist is a gun slinging bounty hunter for hire, and as such, the modus operandi for him interacting with other characters is built into his lifestyle and occupation, as is his anti-hero moral dilemma. Apprehending criminals, even violently, doesn't really make him a bad guy, but then again, he has no issues with, well, murder.

Secondly, like many classic westerns, the series is written in a fairly minimal style, and is lite on dialogue. To that point, as of episode six, we have only learned about three character names, not including the protagonist, who is referred to by others only as "The Mandalorian", or by the seemingly racially pejorative "Mando".

Likewise, the protagonist's facial appearance is obscured by his helmet, and his back-story has as of yet only been related in brief snippets, most of which are set in his childhood, during, we suspect, the Clone Wars - if only judging by glances of Battle Droids wreaking havoc on his town, thereby also explaining the main character's disdain for all things robotic. 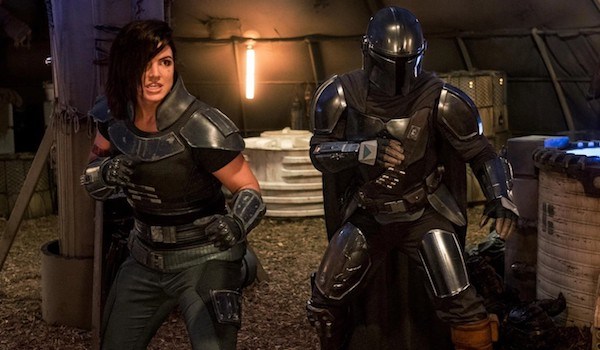 Admittedly, the Mandalorians have always held a special place in the hearts of hardcore Star Wars fans ever since the first appearance of Boba Fett (who I'm told dons Mandalorian armor but is not ethnically Mandalorian). In fact, Mandalorians have been featured in many episodes of the Clone Wars, and one of the ensemble characters of Star Wars Rebels, Sabine Wren, was a Mandalorian.

I think the adoration of the Mandalorians is similar to that of Star Trek's Klingons, in that they are a race whose warrior caste appears to be dominant in their society and culture and their martial ethos is synonymous not just with their political outlook, but with their religious faith. They are within reason a race of knights, though surely, there are Mandalorian doctors, lawyers, and garbage collectors. Psychologically, I believe the appeal of the Mandalorians is not so much their "bad ass-ness" but rather the presentation of a group whose unwavering adherence to "difficult", often uncomfortable, principles are out of reach for our pleasure-driven and compromise-ready contemporary culture.


Episode Four: Setting, Era, and Connection to the Rest of the Canon 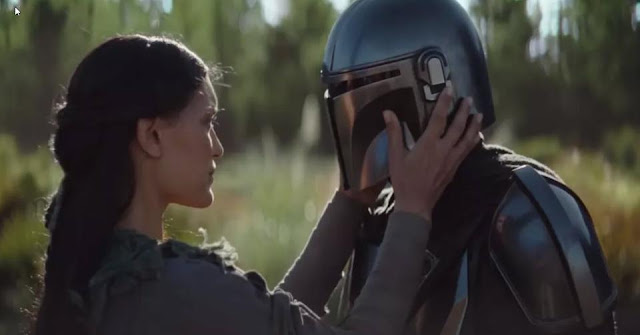 At first I must admit I was guessing that Favreau and Filoni were throwing us an "era" curve, and that the series was actually set a millennia earlier than the feature films and series. But the events of the series do seem to be taking place just after those depicted in "The Return of the Jedi". The Empire is recently defunct, and the "New Republic" is weak, ineffective, and apparently, broke. This only makes sense of course, since under the Empire the Trade Federation, the Banking Clan, and the Techno-Union Guild, were all under direct Imperial control.

This holds true to the clever economic underpinning paradigm of the Star Wars universe as established by George Lucas starting with the mostly atrocious "The Phantom Menace", and expanded on in the Clone Wars animated series. Thus, within reason the Western motif of The Mandalorian is even more visceral as law and order is presented as all but illusionary, with might making right in far off settlements, or, one speeder towns, culminating in episode four, "Sanctuary", which serves as an overt homage to Akira Kurosawa's classic film "The Seventh Samurai". 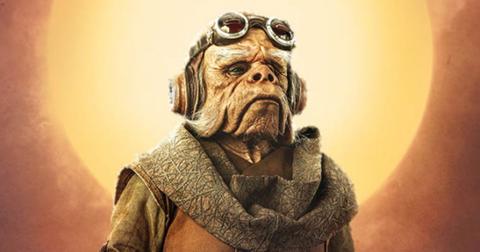 With the conquest of Mandalore, and the destruction of it's moon, outposts of warrior caste Mandalorians have been scattered throughout the former Empire and have chosen to cluster together in secretive cult-like pods, not unalike the first Jewish refugees arriving in neighboring Middle Eastern and Southern European lands in order to escape the genocidal ravages of the Roman-Judean Wars of the first century C.E.

Rather than embracing the more esoteric or artistic aspects of their previous culture, it seems that a fair number of Mandalorians apparently feel that the reason they lost their political autonomy was due to the fact that they were not true to their warrior ethos. So, rather than thinking outside of the box, they're pretty much set on working the box harder. Fair enough, especially in light of the fact that the main character, and we can assume many others, are presented as "foundlings", or rather, war orphans. The Mandalorian's "pod" seems to be controlled by an equally helmet obscured female blacksmith, who serves as the "Fagan" to theses martial Oliver Twists. 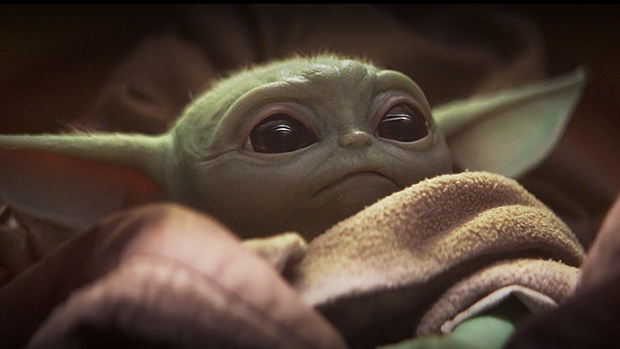 Gun-slinging bounty hunting warrior wanders into town after town in search of quarry in order to accrue "Beskar", which is the special metal that Mandalorian armor is cast from. The condition of a Mandalorian's armor dictates, or rather, reflects his or her "station", and as we must recall their society was a global, or rather trans-global, or ethno-feudal state (run by a Duchess) which had gone space age technology happy.

Anyway, inevitably, the protagonist is enlisted to his potentially most profitable gig, ever, paid for by a group of disenfranchised former Imperials who want him to bring them a highly protected person. No details, no questions, just a location and the age of the target. Needless to say, this turns out not to be a criminal, but rather a child...an orphan. As an orphan himself, the Mandalorian just can't bring himself to turn this little force-wielding tyke over to them, and thus, this starts their life on the run, and the inevitable reciprocal emotional and dependent relationship between the two characters.

As I mentioned earlier the child bears a striking resemblance to Jedi Master Yoda in infant form, and he even wields the force at times. Thus, if the series is indeed set when it seems to be set, then either members of Yoda's species are like the Zombie Jellyfish and reform anew after death, or the child is a clone of Yoda, or merely, that the similarity is uncanny, down to the mini Jedi robes. Nonetheless, the mystery hook is, "Why do former Imperial officers want the child, and for what purpose?"

The Bonus Episodes: The Review 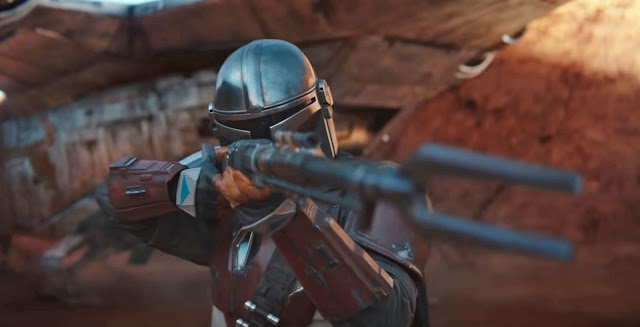 All in all, I really enjoyed the first five episodes of the series, and I find it incredibly consistent with not only the Star Wars film universe, but the extended franchise as well. I find it highly unlikely that it will contradict anything in the J.J.Abrams or Lukas outings, though I don't feel as confident that the variant content in Star Wars novels will be so sacrosanct.

While I occasionally feel like I'm watching a really expensive fan-fiction film (as I did with Rogue One), the series is fully believable (for a Space-Fantasy), is adequately gritty and dark, is not fully dualistic (i.e. is anti-hero driven), and is rife with almost lovingly nostalgic homages to scenes in the original films. I mean, the Mandalorian even stops off on Tattooine and visits the same watering hole where Luke and Obi-Wan first met Han Solo and Chewbacca, and he even sits at the same table where Han shot Greedo. Nice little touches, and rendered loyally, or at least loyally to the images as they existed prior to the Lukas re-releases and added CG generated wildlife minutia.

I have to say that I am eagerly waiting to watch episode six, and I recommend that if you are a Star Wars fan, that you do so too...not just episode six of course...don't be weird, start from the pilot.

Anyway, I assume I'll have to pen a follow-up to this post as the series evolves, but that's for another day.