From the Writer's Studio: Introducing "Sovereignty" - A New Hard-Sci-Fi Series

Welcome back to the Gauntlet of Balthazar for a series of posts featuring a new episodic hard sci-fi series created by the multi-nominated and award-winning screenwriting team and media content company, Nevekari Enterprises. This particular project is titled "Sovereignty", and as the name implies, the philosophic fulcrum that the show rests upon is the eternal debate between how much power a government is given by its citizens and how, and in which ways, individuals wrest or demand their own or local power. 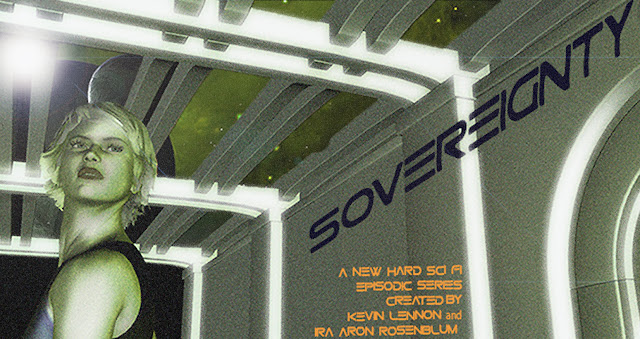 Clearly this is a very prescient issue in the west of late as the culture war between various forms of Marxism and Classical Liberalism has become something of a daily exercise in metallic bickering on both sides.

Obviously, as a socially Liberal, fiscal Anarcho-Libertarian with a strong Conservative-Republican streak, you might have discerned from my earlier forays into politics posted here that I am outspoken in my disdain for all things Communist, Marxist, Socialist, Democratic Socialist, Intersectionalist, Globalist, and Post-Modernist. Thus, to be clear, I am patently FOR national sovereignty and the unique cultural identities that individual societies possess, and ideally, should preserve.

Saying that, Nevekari Enterprise's "Sovereignty" addresses the push and pull of individual rights, ethnic and civic statehood, and larger regional block identities such as membership in globalist organizations such as the United Nations and the European Union.

As a hard-sci-fi, Sovereignty takes place in the year 2158, in the aftermath of a series of dramatic changes to our current social milieu. These are not limited to, but include, a period referred to as "the Great Crisis", during which the collusion of aggrandizing warfare, environmental calamities and fiscal collapse has led humanity to the brink of extinction. As a result, the formulation of the United Nations-like Earth Sphere Government was formulated to quell the resultant anarchy. In a series of conflicts termed "The New Lands Wars", eventually most of the world's nations have come under the hegemony of the Earth Sphere. However, as humanity has expanded past the boundaries of Earth, throughout the solar system pockets of those seeking cultural and political rights have formed and define the conflicts that drive the series forward.

Please feel free to visit our homepage at http://nevekari.com/Sovereignty.html for more information about the themes and story of this timely project.