From the Writer's Studio: The Sexual Politics of Toy Story IV

Welcome back to the Gauntlet of Balthazar for another deep dive into the art of screenwriting.

As a starting point I guess I should confess from the get go that I have a slight aversion to animated films in general. I'll admit it's a peculiar undercurrent of "un-enjoyment" that I have a hard time explaining, or justifying, in that I readily watch South Park, Star Wars: The Clone Wars, think that Fantasia was one of the great classic films of yesteryear, and if CG is any indication - I watch tons of content that has been altered by some form of animation.

Regardless, I must give PIXAR credit where credit is due. Forgoing the fact that the 21 feature films (and shorts) are animated, (and well animated I must add), it is obvious that what attracted throngs of fans to their films was the writing. The folks at PIXAR, originally a Lucasfilm subsidiary, and now a Disney property, was founded in 1979, and through the assistance of various investors such as Steve Jobs, at the time of their purchase by Disney in 2006, PIXAR had a valuation of $7.4 Billion. 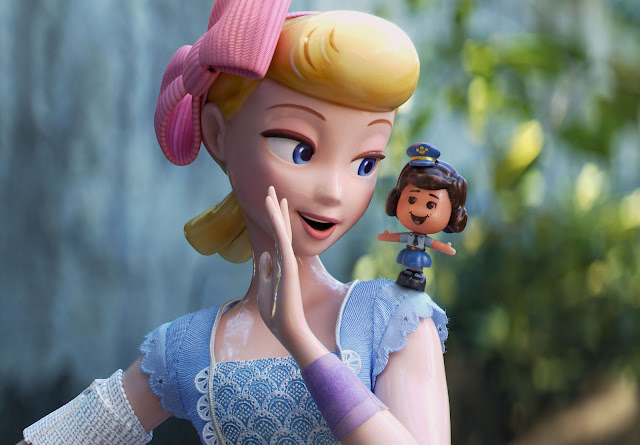 At least five of their films - Finding Nemo, The Incredibles, Cars, Monsters, Inc., and Toy Story are franchises with sequels that account for 13 of the 21 features. At the time of this blog post the most recent of them is Toy Story IV, which is listed as having a $200 million budget and drawing almost 1.1 Billion over its six week box office stint. So, yay, Go PIXAR!

What I personally have always admired about PIXAR, or at least leading figures like John Lasseter, was their uncanny ability to make adults sob uncontrollably in response to the sentiment- ality and overall relate-ability of their story-lines. Masters of catharsis - the bastards! Still, kids of all ages are capable of watching movies like UP! over, and over, and over, again.

So let's look at Toy Story franchise, and the newest sequel in the series, shall we?

First off, the protagonist of all of the films is a cowboy doll called Woody, voiced by Tom Hanks. All of the other characters are secondary or tertiary perhaps with the exception of Buzz Light Year - a not so brainy space explorer figure, who supplies the role of a comedic Enkidu to Woody's Gilgamesh. Buzz's best moments were arguably in Toy Story III where his story arc included a memory loss, bouts of self-doubt, and a budding love relationship with a cowgirl doll called Jessie.

Gone is all that in Toy Story IV. With a screenplay penned by Andrew Stanton and Stephany Folsom with some story blocks contributed by Lasseter, and even the delightful Rashida Jones, who I like very much as an actress, the focus moves firmly back to Woody.

So, you're probably wondering about now, "what does this have to do with sexual politics?" - as mentioned in the article title. Well, I'll illuminate. 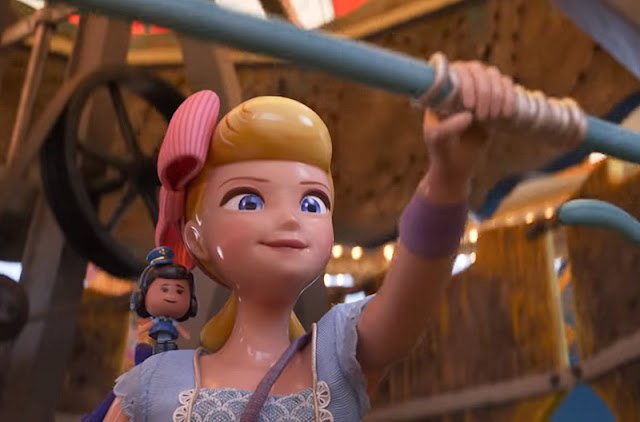 It's the Little Bo Peep character.

While she is clearly presented as a potential love interest for Woody, she lacks entirely an internal story arc of her own. Sure, in her absence from the series she's become a bit of bad ass having lived out on her own without her former friends as a "lost toy", but my question is, is that enough?

I suspect that the writers felt that by making her a capable, outspoken, woman that they had sufficiently empowered her persona to stand as a shining example of modern femininity. But did they? I think not. For while giving her character a healthy dose of vim they absolutely failed to impart to her a story arc of her own.

On the other hand, In Toy Story IV Woody clearly experiences an crisis of conscience and an existential malaise arc throughout, defined by his dedication to his leadership role in his group, his feelings of uselessness and abandonment in regard to his new child "Bonnie", and the regret of not leaving earlier to explore a romantic relationship (we suspect) with Little Bo Peep.

These arcs all resolve by the end of the film.

But Bo Peep, for all her so-called "archetypal feminism", does not evolve at all over the acts. Thus, in the guise of virtue signalling their feminist stance, the writers failed to make Bo Peep an actual human. Uhm, a toy of course, but you know what I mean. For goodness sake, if she just talked about Woody or one of the male characters a tad more the script would have surely failed the Bechdel test.

Being the weird deconstructionist I am, I of course re-wrote the problematic issue in my mind as I watched. I do this by imagining what I suspect is going to occur, but in this case, never did. I think upon Woody encountering Bo again, she should have feigned good will regarding his quest of rescuing the captive "Forky" from the erstwhile villain of the piece "Gabby Gabby". While Woody would have been fooled by giving her the benefit of doubt, upon meeting up with Gabby, Bo Peep should have sold Woody out for something that she wants from Gabby. While this casts her more in the position of an antagonist, Bo then has the entire script / film to, first; feel remorse for her betrayal, second; to turn on Gabby, and third; to acknowledge her feelings for Woody. She even had a built-in chorus in the form of her sheep who could have prompted her to question her bad decisions. As Bo came to the rescue at the end of the story, the completion of her own arc would have paralleled Woody's, creating a perfect ending, both structurally and emotionally. 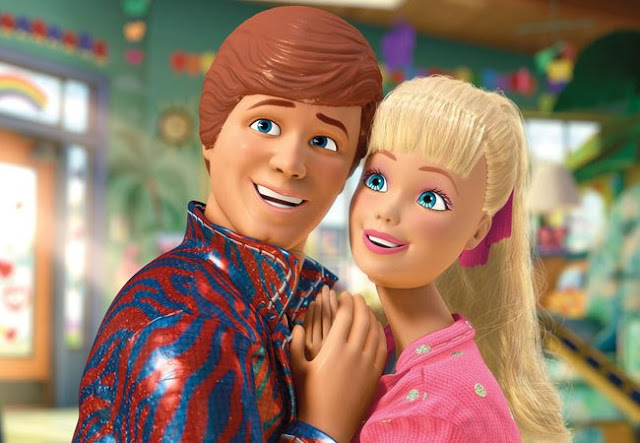 The way the film is now, she can take or leave Woody, and the onus of him staying with her specifically is neutral enough that they could just be friends. Now I know that these films are for the most part made for children, but you may recall that there were several notable romances that littered the plot of the last film - specifically between Ken and Barbie, Mr. and Mrs. Potato head, and Buzz and Jessie. My suspicion is that the left-wing virtue signalling culture of the Hollywood elite - long infected by Marxist Intersectionality and Post-Modernism has become so entrenched that relationships, maybe even more so hetero-normative ones, are unconsciously (or maybe overtly) perceived to be best avoided altogether. This is probably why familial (particularly sister-sister and mother-daughter) and platonic friend relationships have supplanted dashing Prince's coming to the rescue in all of the most recent Disney Princess outings, such as Frozen and Maleficent.

While I understand that the outdated images of a helpless, agency-bereft waif like Cinderella or Aurora requiring a man (or Fairy Godmother...or both) to swoop in and save them from their plight is a bit of utopian wish fulfillment that is even more disastrous for female character writing than Peep as she stands, as I understand it, fictional characters are designed simulate humans, and must behave like, well, the humans we all interact with on a daily basis.

Clearly in a climate where upon writing a male-female love relationship, a mob of Twitter goons attack you for not making the couple in question homosexual, or start re- visiting Metoo rape culture topics, or worse, they up the ante and denounce the creators as bigots for not addressing the triggered feelings of the non-binary trans-gender midget furry demographic, it is all certainly concerning to say the least.

I personally like writing...good writing. Writing that is so solid that it stands the test of time. And when I'm talking about time I don't mean just in the decade sense, but in the century and millennia, across culture and language sense. 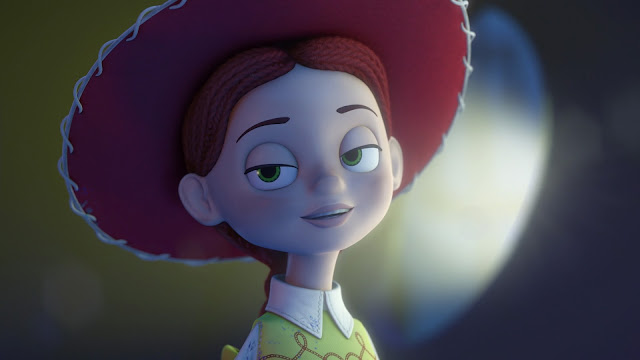 Don't get me wrong, catering to a specific audience is some- times a fully sound and appropriate premise, but robbing char- acters with previously established personas of their humanity is never a good thing. I mean, did Buzz and Jessie just sort of fall out of love since the last movie? Ken's desperate protectiveness of Barbie was certainly not in the mix. And even the touching concern Mrs. Potato Head expressed repeatedly for her spouse was relegated to, yep...one snippy complaint.

In my mind Little Bo Peep was not just a "capable" woman, she deserved to learn and grow through the film, like Woody, and to experience her own epiphanies and feelings, that we, the audience would have shared with her in catharsis.

But alas, while I generally enjoyed the ride of Toy Story IV, and their forays into childhood sentimentality were still effective enough to urge me to feel great pathos for both the heroes and antagonists in the film, the mismanagement of Little Bo Peep's character arc suggests that it is surely the weakest written film in the franchise.