The Tightening Noose: Technocracy Versus Liberty - China, Davos, the Left, and the Tactics of Fear 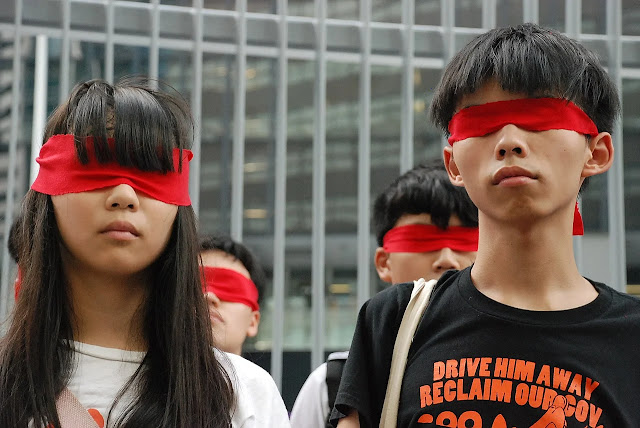 Hi all and welcome to, or back to, the curious yet disquisitive Gauntlet of Balthazar for some speculations and observations regarding our fellow citizens - the enablers, the compliers, the globalist utopians, the authoritarians, and the malevolent, around the world.

It seems like just yesterday that the Gauntlet made the happy announcement commemorating this blogs 40,000th page visit - a situation that had been a slow climb since we first went on- line in early October of 2016. In fact, it took just shy of four years to get there, and admittedly, the last push from 25,000 to 40,000 was in no little way aided by the emergence of a sizable block of readers based in Hong Kong, and secondarily from users in mainland China.

This swell seemed to me to just happen to coincide with the emergence of the pro-democracy movement in Hong Kong, which alongside Catalan and Kurdish Independence, the Gauntlet respects, admires, and supports. In fact, as a general rule, and for the most part, any group or movement that supports freedom, liberty, egalitarianism, and endorses national sovereignty and local governance over the globalism of Davos and blocks like the European Union (but not necessarily global- ization), and disdains all forms of Marxism, just tickles me to no end.

But, as you may know, the Chinese Communist Party, in violation of their stated respect for the institutions and traditions of Hong Kong, began to crack down heavily on the leaders of the Pro-Democracy groups, and arrested Joshua Wong, Agnes Chow, Ivan Lam, Andrew Wan, Sam Cheung, Wong Ji-yuet, publisher Jimmy Lai, and pretty much any notable figures in the movement. By early January 2021, 55 such activists were in police custody. 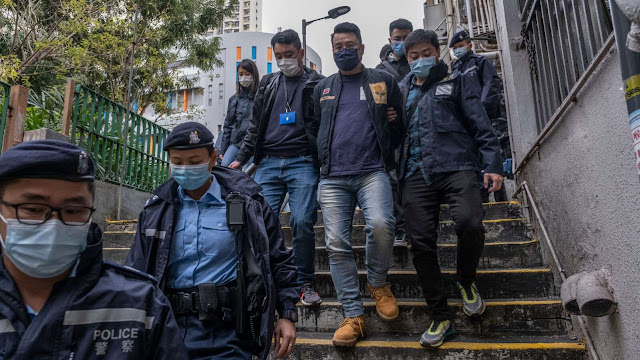 Not that the Gauntlet's plight is comparable to that of political detainees, but those once respectable page visit numbers very quickly came to a grinding halt around the time of the US Presidential Election, and views plummeted not just from Hong Kong and China, but from all over the world. I'm sure that there are those who would advise the Gauntlet to not look to outside forces, and instead to assume that the content here suddenly got really, really poor and the audience screamed in unison, "Enough of you, dirty Gauntlet!". Yeah. Right.

As you can see from the analytics graph depicted to the right, this drop off was both sudden and severe, and visually is really striking - with the decline starting in the last couple of weeks in October. Hence why I am divulging such otherwise proprietary information here, so you can see the crystal clear example of suppression as it is.

Regardless, I also find it incredibly coincidental that this new wave of CCP crackdowns in Hong Kong also occurred during the contested period following the most recent US Presidential election. Given, the CCP through their operatives in the Hong Kong police force, did a 15 activist roundup beta-test as far back as April 2020, but this new wave was methodical, unilateral, and was clearly designed in purpose to break the back of the movement.

While we in the US (at least 80% of Republicans and 30% of Democrats) wrestled with the suspected maleficence of the Presidential, and even the Georgia Senatorial races, little did we realize that political leaders on the left were lying like a pack of dedicated predators, biding their time for the right moment to push their advantage with a vindictive glee that can only be described as psychopathic. But, this is what happens when the basic agreement to disagree in a civilized society is abandoned by one side in an argument.

As someone once said, and I've stated here before: "the right plays by the rules the left established, and the left plays by no rules at all". I also like this playful slap against post-modernism I feel originated here: "Republicans long ago ceded the moral high ground to a group of people who argue that there is no such thing as morality". 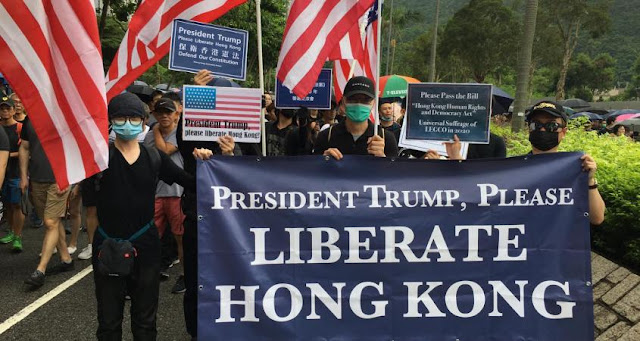 Anyway, back to the issue at hand.

Just in the last few days US President Donald J. Trump; a friend to the Hong Kong activists, was unilaterally de-platformed by literally every single Silicon Valley Tech company (Twitter, Facebook, Amazon, Snap, Shopify, etc.). And it did not end there, a great number of individuals connected to the President (such as lawyer Sidney Powell) were also banned and some were even served with lawsuits listed to be in the multiple billion dollars range.

The Democrats, now boasting a super-majority in the Oval Office, House and Senate, jump-started the wheels of a last minute impeachment (we can only assume in a gambit to ruin Trump's chances of a second-term return in 2024), and some radical operatives in the House even vied for the forced removal of outspoken Conservative / Libertarian Senators like Ted Cruz, who btw, I voted for in the 2015 primary against Trump. Message received loud and clear: it's our way or highway, so never question the state, Winston.

Enter the tech-oligarchs: Dorsey, Zuckerberg, Bezos, and Pichai; who mercilessly, and possibly illegally, summarily removed the President of the United states from all of their platforms as swiftly and simply as they did Alex Jones (another beta-test). The reason was for nothing he said (though the excuse was the Capitol Assault), but because he is Trump, and they don't like him, Democracy, Free Speech, or his followers, and he's on his way out, and so they can do it with impunity (or so they believe). 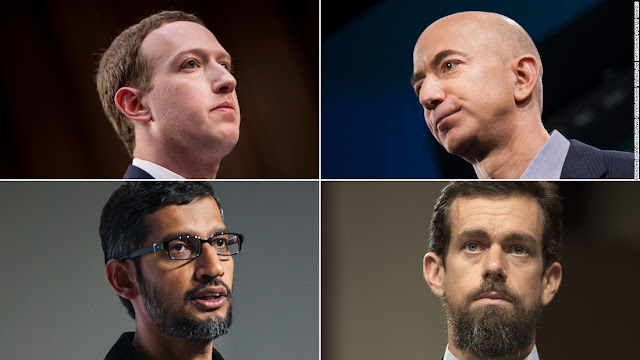 Personally, as a right-leaning Libertarian / Republican it is hard sometime feeling like you're always working defense against an opponent whose playing by a different set of rules, but the one thing I can say with complete confidence is that the Democrats in government, their Communist street thugs (Antifa & BLM), their allies in Silicon Valley, their mentors in Davos, psy-op legacy media sycophants, and the Chinese Communist Party all share a disdain for liberty, and have fixed their stars on holding and gaining authoritarian power, while feigning actual liberal values with buzzwords like "equality" and "inclusion". 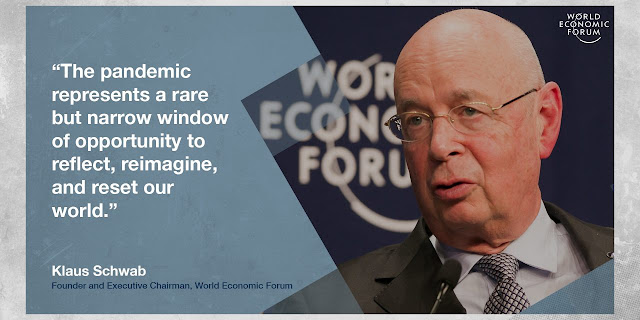 Their means are simple, and are taken right out of Karl Marx: A Planned Global Economy highlighted by Government control of large swathes of the private sector (including health care), Diminished National Sovereignty, Forced "Equality", and Wealth Re-Distribution, all highlighted by Orwellian new-speak PC language 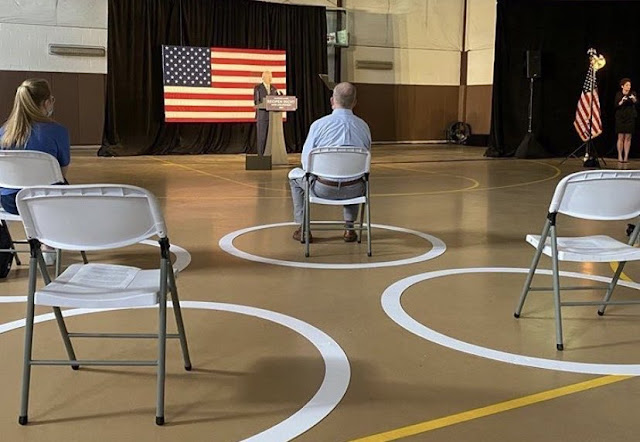 In the west at least, this is all held in place by pitting victim narratives against one another in an endless Race, Class, and Gender War (now known as "Critical Race Theory" or technically, "Intersectionality"). China gets to stay racist, 'cuz, hey, whatever they want, right?

Even if I can wrap my head around the fact that a non-entity such as creepy corporate shill Joe Biden received more of the African-American vote than any Presidential candidate in modern memory, including the first African-American President Barak Obama (really?), and notwithstanding that Trump took more African-American male votes than any Republican in 50 years, one would have thought that with their victory and transfer of power imminent that there would have been a modicum of grace coming from the Democratic side. But alas, They've Won! And now heads must roll.

Sadly, I tried to warn people of this eventuality, here on the Gauntlet, on social media, in my art, and verbally in person, but the control that these forces hold over our shared narrative is holistic, pervasive, and almost insurmountable. They control you completely, and if you don't believe me, ask your tracker (I mean cell phone) why you've been under house arrest for the past year. Yes I know it's a horrible plague, with sniffles and a 0.02% death rate, and California with a hard lock-down is faring worse than Sweden and Florida with none, buy hey, it's "The Science". I personally believe in "Science". I also believe in "Truth" - not "Your Truth" or "My Truth", just Truth, and it's in short supply. But I have news for you - this lock down was put in place so that your perception of reality could work out that Biden, who barely left his basement and never broke 6,000 attendees (even this is contested) at one of his rallies was able to fully trounce Trump, who regularly broke 30,000 screaming devotees all over the country.  Indoctrinated far-leftist radicals in the US engaged in terroristic activities throughout most of the year and the entire summer, burning several cities to the ground while setting up makeshift anarchist / dictatorial compounds, all egged on by the notion that Blacks are inordinately targeted by Police, when ten times the amount of Whites, and all other races in America meet their deaths at the hands of law enforcement every year. Not a great stat, and unnecessary deaths are always a shame, but hey, I've got a crazy idea - if you don't want to die, don't attack a couple of guys who spend their time looking for trouble, and carry guns and tasers. Just shut your mouth and comply. Yet, after all of their "peaceful protests" i.e. riots, it took the first instance of Republican violence, uh EVER, (the storming of the Capitol) for them to use it as an excuse to crack down. 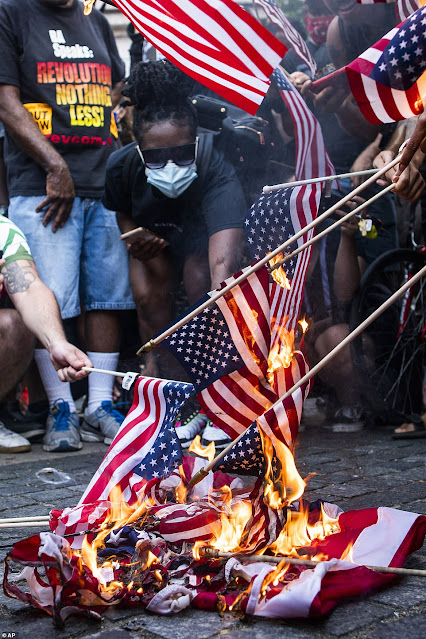 A friend of mine recently explained the left's psychological tactics in a metaphor that I find so cogent I feel I must share it here.

You're in a room with your wife, kids, and dog. A stranger arrives and murders all of them, except for you. He then leaves and returns to the adjoining room where he tells his friends that in a minute a crazy person (you) will be coming through the door after him. In due course, you enter beside yourself with grief and anger. See, I told you - that's the crazy person. This is a tactic that abusive spouses regular use on their partners, and frankly, Republicans and Democrats need a divorce. The problem is, who gets the country?

In the end I must point out that the left will fail, as is their nature, and hey, friendly warning to you guys - if you couldn't stand Trump because of his demeanor, or he wasn't like the Neo-Cons, Rinos, and Squishy Republicans you got used to pushing around and who never punched back because you and they were too busy being corrupt war-mongers, just imagine what sort of an uncompromising monster you'll get the next time if you continue to refuse to play fair.

I know we will.