From the Writer's Studio: What We Learned From Disney+'s Star Wars: "The Mandalorian" Season Two

Greetings and Happy New Year, and welcome back to the Gauntlet for a new media review, and a continuation of sorts. 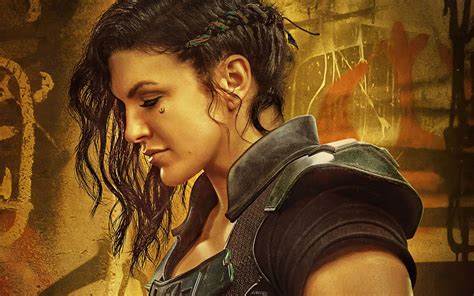 Literally twelve months ago, give or take a couple of weeks, Season One of Disney+'s / Lucasfilm's epic space-western, The Mandalorian, was rapidly approaching its climax, and in suiting fashion, the Gauntlet put in its two cents, and added to the general online flurry regarding this wonderful serial as well as to the abundance of articles addressing Star Wars here.

The Gauntlet's review for that season was broken down into several categories, including; "The Creative Team", "The Structure", "The Appeal", "Setting, Era, and Connection to the Rest of the Canon", "The Social Circumstances", "Enter the Moral Dilemma", and lastly, "The Review". Overall, I think it's a pretty fair analysis, has aged very well, and I stick by everything in there.

Therefore, "why go on?", one might ask. And in that, the answer is very simple. Some very interesting reveals, developments, connections, and relationships, came to light over the second season of The Mandalorian and which addressed a number of long standing questions presented in other parts of the Star Wars franchise - notably the original films (particularly Episodes IV-VI), as well as two of the animated series -The Clone Wars and Star Wars Rebels.

So let's head in, shall we?

Episode I: The Return of the Gunslinger

The western motif presented from the start was back with a vengeance from the first episode of the season, "The Marshal", where the Mandalorian arrives at a town on the outskirts of civilization, of course troubled by an looming threat of a creature familiar to Star Wars geeks as a Greater Krayt Dragon. In turn, he offers his aid in freeing the citizens of the municipality from their impending doom. This of course further verifies that Din Djarin; The Mandalorian, is indeed a "good guy". To push it further, in Episode Two, in exchange for information that might be useful in locating a Jedi who will raise his charge, i.e. "Baby Yoda" (revealed to actually be called Grogu) the Mandalorian transports a pregnant woman to be reunited with her husband. While he is still presented as "generally morally ambiguous", his position as an anti-hero is solidified all the more in the second season, but very cleverly, the writers and directors counter this by raising questions about his deeds in the murky past.

One such issue presented to further this angle was seen in Episode Seven, "The Believer", where we find out that for some reason dear Mr. Djarin seems to possess an Imperial profile that grants him security access to their databases, implying service in the Galactic Empire.

Episode II: The Attack of the Real Mandalorians (This is the Way)

At the very end of the first episode we are shown a brief glimpse of Temuera Morrison viewing from afar the Krayt Dragon incident. For anyone with a memory, Morrison was the actor who played Jango Fett, and all of the Clones, in Star Wars Attack of the Clones and Revenge of the Sith. According to Star Wars lore, Republic Clone Troopers, ex- cluding a handful, were annihilated by Emperor Palaptine in the aftermath of their role in slaughtering most of the Jedi. A "no loose ends" principle brought to the umpteenth level. Thus, the appearance of Morrison suggested to fans that either the beloved Captain Rex or perhaps Boba Fett was entering the series, but with the facial scaring, and his presence on Tatooine, it seemed the latter choice was the operative one. And so it was. Star Wars canon had always posited that Jango and Boba Fett wore Mandalorian armor, but were "not Mandalorian" - a situation that served as a prequel for Din Djarin's position as a "foundling" - indoctrinated into a Mandalorian cult.

Stellar (pun intended) Episode Three, "The Heiress", marked the introduction of disenfranchised Mandalorian royalty in the form of Lady Bo-Katan Kryze, played suitably harsh by the infectious Katee Sackhoff - reprising her Clone Wars animated series voice role. As a result, the Gauntlet and the rest of the audience was treated to upper crust ethnic Mandalorians, a Mandalorian by creed, and a fallen crypto-Mandalorian, all appearing on screen at the same time.

I would suggest that the single best line of script dialogue which appeared in the season, and maybe the series, was uttered by Din Djarin as he snippily deemed Bo-Katan and her entourage: "You're not Mandalorians", because they're ethnic Mandalorians and do not hold to the martial-religious creed in the same way that he does. A case of the convert out-believing the genuine article - absolutely darling!

One the most beloved Star Wars characters never seen before in live action is Ahsoka Tano (played here by Rosario Dawson). Ahsoka first appeared in the Clone Wars animated series as Anakin Skywalker's cryto-padwan. She serves as not just a protege but also as yet another person close to Anakin who just doesn't see his descent into becoming Darth Vader. We are meant to almost pity Ashoka for her obliviousness, as she is presented as spending even more time with Anakin at the battle front than he does his wife, Princess Amidala, who is pregnant back at home. 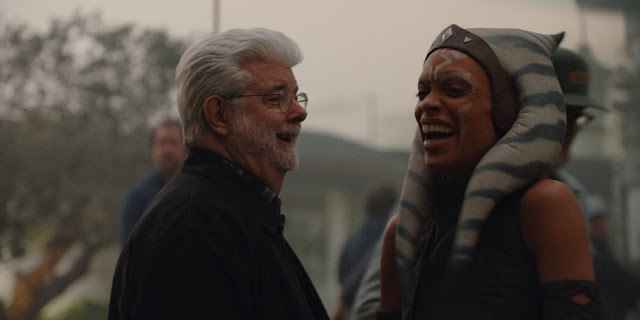 Of course the similarity doesn't end there, since in the first century the culture of the Judean Kingdom was highly militarized and radically violent. Yet, it was also a period that set the stage for the more insular, pacifist, religion focused communities that sprung up as the Jewish diaspora spread. The Mandlorian in effect fits right into this cultural paradigm, regardless of the fantasy element. 'Cuz hey, Mandalorians don't really exist, right?

So after a little Samurai team up, a teaser that Ahsoka is searching for Admiral Thrawn, and ergo the missing Jedi, Ezra Bridger, not to mention the recurring appearances of burly, yet super-sexy, Gina Carano as Rebel Jumper Cara Dune, former Imperial bad ass Moff Gideon (Giancarlo Esposito) suddenly returns, and soon after absconds with little Grogu, much to the Mandalorians dismay. 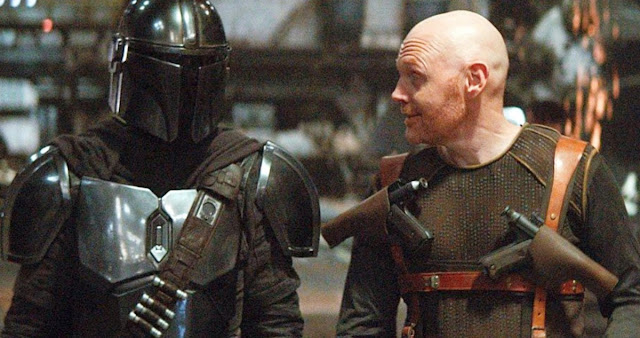 This of course leads to the "heist" phase of the season, where Din gets the band back together. He and Boba Fett, the assassin Fennec Shand (Ming Na-Wen), Cara Dune, and Migs Mayfeld (played convincingly by comic Bill Burr) as well as Bo-Katan and her aides (but curiously no Ahsoka), locate where Moff Gideon is holding Grogu, board his Cruiser, and basically slaughter everyone. But hey, they're storm troopers and stuff, I guess.

In the Season Two finale episode, named "The Rescue", some really interesting elements were introduced, and warning: spoilers ahead, they involve the future of Mandalorian culture.

If you recall at the end of Season One we learned that Moff Gideon somehow possessed the "Darksaber", which was / is a defining qualifier of rule within the traditional martial culture of old Mandalore. In the Clone Wars it was taken from Pre Vizsla, the leader of Death Watch (note: Mandlorian foundlings like Din Djarin are referred to as "Children of the Watch"), by Darth Maul, and Bo-Katan would not accept a non-ethnic Mandalorian as ruler of Mandalore. Hence the beef.

As it turns out, Bo-Katan must have had it at some point, because when Moff Gideon is defeated by Din, it effectively makes Din leader of the Mandalorians - much to Bo-Katan's frustration. Though Din does not want the blade, it can only be won, not given, which sets up a nice conflict for Season Three.

In the end a CG-morphed Luke Skywalker (and R2D2) circa Return of the Jedi arrive, and after a legitimately tearful farewell with his erstwhile father-figure, Luke takes little Grogu with him - we can expect to the school that Kylo Ren later destroys. Thus ends Season Two, setting the stage not only for The Mandalorian Season Three, but an Ahsoka series, a continuation of Star Wars Rebels, a Cara Dune series, etc., etc.

Episode V: The Rise of Directors and Writers (The Force is With Them) 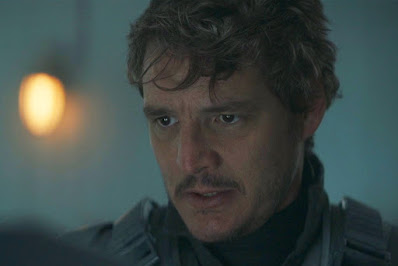 This season of the Mandalorian was marked not only by the appearance of notable guest stars like Timothy Olyphant, John Leguizamo, Titus Welliver, Horatio Sanz, and Michael Biehn but some really great writing and directing by series co-creators Jon Favreau and Dave Filoni. Likewise, a crop of talented guest directors such as Peyton Reed, Bryce Dallas Howard, Carl Weathers, Robert Rodriguez, Rick Famuyiwa returned or arrived to lend a hand and joined the ranks of Taika Waititi and Deborah Chow as talents behind the camera.

I have suspicions that the lead actor in this series, Pedro Pascal, might be prone to overdo it at times, but fortunately he is often cast as taciturn or introverted characters. In this case he's still for the most part obscured by helmet, but in the three times or so we've seen him on screen this season, he is awesome. In fact, to Pedro's credit he probably can boast the best on-screen moment in Wonder Woman '84 - though the Gauntlet will dissect that train wreck in the next From the Writer's Studio review.

All in all, it was a great, great season for the Mandalorian. The Gauntlet gives it 4.9 Gauntleted lightsabers out of 5.0! (the .01 is for the metachlorians, of course).