From the Recording Studio: An Upcoming New Music Release Announcement 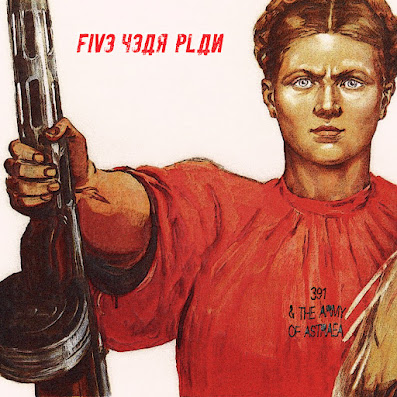 Welcome to, or back to, the redolent yet malodorous Gauntlet of Balthazar, for a brief announcement regarding the forthcoming release of a new full-length concept album by 391 & the Army of Astraea.

"Five Year Plan" (yes, that's the name of the record) has been in the works for the last couple of years, being attended to piece-meal in the spare time between other recordings, screenplay writing, and regular life "stuff". It features, Industrial, Electronic, Classical and Jazz-Influenced Soundtrack work, a Tango, various ethnic influences, and even Folk-Inspired songwriting elements that within reason kind of all work with each other. In all there are 21 Tracks, with most being instrumental.

I guess it could be described as a "political album", in that the theme of the record is the authoritarian abuses of the former Soviet Union (circa 1917-1989), and in general, serves as an attack on the related concepts of Globalism, Marxism, Socialism, and Communism. With snippets of Stalin's speeches, some oddly dissonant melodic progressions, and many, many arpeggios, it is a suiting release to mark a period in which the doubling down on failed utopian policies, errant Malthusian reasoning, big-tech speech censorship, misplaced inter-sectional reverse racism, and the misunderstanding of sound economic and scientific thought is finally being diminished after many, many years of the far left's multi-generational cultural hegemony over academia, the media, and of course, Hollywood.

A decision hasn't been made yet as to the actual release date of this recording, but I assume it will be sometime later in February 2022, or maybe even March. Theoretically it should be followed by a single version of the one vocal track on the album, "Utopia", paired with a yet to be written or recorded "B-Side". As always these recordings will be available on Bandcamp, and will be linked here, but I suspect there will come a day when some kind of purchase-for-download system will have to be applied.

Anyway, I hope you all, or at least some of you, listen up when the day comes that it finally does get released.

Email ThisBlogThis!Share to TwitterShare to FacebookShare to Pinterest
Labels: 391 & the Army of Astraea, From the Recording Studio, Music, Stubborn God Productions