From the Recording Studio: An Archival Release 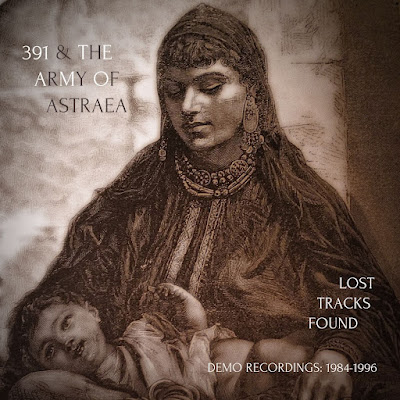 Well hello there everyone out in Gauntlet-land, I know its been quite a while but, you know, life and stuff, and apparently screenwriting and mixing three albums at the same time takes up a bunch of time. But I digress...

Anyway, the Gauntlet has gone back on in order to announce a very special new release Tuesday, which features the first of three full-length 391 & the Army of Astraea albums set to debut on Bandcamp over the summer of 2022.

Two of these issues are archival in nature, and this one, "Lost Tracks Found - Demo Recordings 1984-1996" is the first. It is a clear companion to "Stubborn God Productions - Working Backwards '84-'96"; which chronicled group and duet recordings made in the same period. But what makes this album distinct is that it features "solo performer" guitar & voice driven songs and instrumentals rather than electronics.

Obviously these are era specific and much had to be done to create a uniform sound quality for the collection. Within reason the Gauntlet would describe the pieces as falling in the Post-Punk, Alternative-Rock, Folk-Rock, and Industrial-Rock genres.

As always the player is embedded below, so, listen, enjoy, share if you can, and please follow 391 & the Army of Astraea on Bandcamp (and the Gauntlet here of course).

Thanks so very, very much for supporting this aspect of my / our varied creative endeavors.

Email ThisBlogThis!Share to TwitterShare to FacebookShare to Pinterest
Labels: 391 & the Army of Astraea, From the Recording Studio, Music, Stubborn God Productions