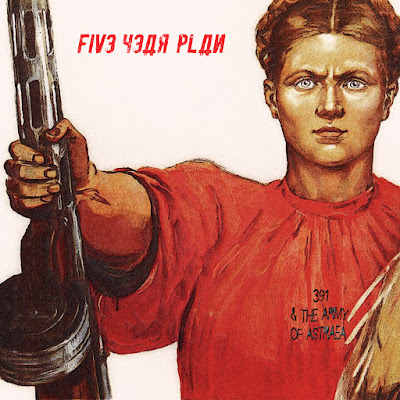 Hello...hello all, and welcome to, or back to, the cantankerous yet demure mighty Gauntlet of Balthazar for a very, very, special (and frankly long-time coming) “New Release Tuesday”, for, well, a new release in the “From the Recording Studio”, as well as the “Electronic Music Give-Away of the Day” categories here on the Gauntlet.

Today’s full-length album release is a 391 & the Army of Astraea recording titled “Five Year Plan”, and I feel that I would be remiss if I didn’t mention up front that the album took from start to finish just short of three years to record and mix (not that it was the only artistic project being undertaken in that same time period). In synopsis I'd say that overall the twenty-one tracks contained on the album thematically and, heh, heh, "collectively", address the unbridled authoritarianism of the former Soviet Union, and by extension, all things Communist, Marxist, Socialist, and Totalitarian.

Admittedly, if you’ve even cursorily peered into the mysterious workings of the Gauntlet previously I’m sure you’ve noticed the anti-Marxist and anti-Far-Leftist bent of the site to be quite overt, but perhaps you assumed this bias was unfounded, or was based on an ignorance of those beliefs or their application. Well, let me address those errant contentions from the get-go. You see, aside from the fact that in my youth I was extremely enamored with the beautiful dream of a Socialist utopia before "waking up" in my early twenties, “Five Year Plan” endeavors to take a comprehensive (albeit musical) look at the totality of Bolshevik history – from the purge of the Mensheviks to the slaughter of the Romanov children...from the imprisonment of dissidents in arctic “re-education” camps to the deportation of the Kalmyks...from ethnic and religious bigotry being disguised as “revolutionary” to the invasive surveillance of the secret services...from top-down dictatorial rule to cold war politics and proxy wars, and from the premeditated causation of famine to government appropriation of private property, etc., etc., etc.

But this collection of tracks is more than just a philosophic testament to the "opposition stance" and the moral and economic insights of the likes of John Locke, Adam Smith, the Federalists, the Whigs, the Jeffersonian Republicans, other Classical Liberals of the Enlightenment, Anarcho-Libertarian Tea Party patriots, social-religious Conservatives, or even knee-jerk "Americanism". It is rather a musically diverse work that incorporates faux-classical, third-stream jazz, folk-traditional-world music elements, occasional improvisation, rampant mellotron use, dissonant tonalities and loping rhythms, film score elements, and perhaps an over-abundance of arpeggios, into an experimental, or avant-garde, industrial-electronic music infrastructure. From a title track which morphs into variant versions over the course of the album, to the haunting singer-songwriter tune "Utopia" - facetiously written from the perspective of a “true believer”, to a cold war-tinged Russian Tango, recurring Georgian Choral motifs, as well as ethno-typical Jewish and Karelian melodies - these elements all arrive at a quiet place where hints of the subtle influence of composers like Jerry Goldsmith, Modest Mussorgsky, and Russian Cabaret icon Alexander Vertinski, poke around in the underbrush. All in all, “Five Year Plan” just might be the most complex, diverse - yet unified, 391 & the Army of Astraea recording yet - barring the absence of a few more rock-based vocal songs (which I’m pretty sure will be forthcoming shortly – more on that later).

Anyway, if you do give “Five Year Plan” a try (the embed is directly below) I hope you find some enjoyment and elucidation in it, and if you do; I emphatically encourage you to support this cost-free aspect of the Gauntlet's art by listening through and following 391 & the Army of Astraea on Bandcamp, Though of course if you find it in your heart to download and donate to the cause that is very nice as well. Regardless, if you can, please share the page with others who you feel might appreciate it, and if you do head over to Bandcamp you can also find comprehensive liner notes for each track. So there's that.

Also, if you generally like what you see here, feel free to hit the Gauntlet follow button to the top right of the main page, and hold on patiently - there’s a lot more content (art, media and screenwriting critique, music, politics and philosophy) coming here soon, or kind of soon, and as always, till next time.

Email ThisBlogThis!Share to TwitterShare to FacebookShare to Pinterest
Labels: 391 & the Army of Astraea, From the Recording Studio, Music, Philosophy, Stubborn God Productions