From the Graphic Design Studio: The Evolution of a Branding Logo - Part II

Looking back at the last, or rather, the first post in this new series, it occurs that while I displayed the "Partisan Earth" branding logo design shifts over time, I failed to explain why these shifts occurred, as well as to what the visual preferences were that spurred on the overall changes in the design work.

So lets get right to it.

The overall background through all of the iterations of the logo is the Pleiades star cluster, taken from an on-line NASA public domain repository, which was then highly augmented in a variety of graphic design programs. For those of you who are unaware, you do in fact see the Pleiades everyday when driving on the highway, as the cluster is know in Japanese as "Subaru", and the five main stars of the Pleiades cluster just so happen to also be Subaru's well-known corporate logo.

The Pleiades cluster image fits in very nicely with the story-line of Partisan Earth, and plays off many UFO conspiracy theories, which place the "Grays", "Reptilian", and "Humanoid-appearing" aliens as hailing from that part of the galaxy. In the universe of Partisan Earth these species are referred to as the "Mhamazi", the "Nagar", and the dominant species, known as the "Sothians". Likewise, as we envisioned the Sothians originally being human beings abducted from Earth by the Nagar, this fit in nicely with the conspiracy theories of alien abductions, albeit that we flip the paradigm on its head, having "life out there - started here", rather than the usual "Chariots of the Gods" - life was seeded here from out there, as seen in Prometheus, Battle-Star Galactica Re-Dux, 2001: A Space Odyssey, and countless other fascinating, and not so fascinating, Science-Fiction films and series. In fact, recently, the absolutely hilarious "People of Earth" television series, plied this exact paradigm, albeit in a comedic way. It is probably only a matter of time till the Pleiades are mentioned in the course of that series.

The few planets that are set in the foreground of the image were placed there simply for visual perspective, and to psychologically distance the story from occurring specifically within the Pleiades. As the creators we have discussed many, many times, if this specific location should ever be mentioned in the series, or if the action within should even be placed in our galaxy, and rather be ascribed to events occurring in a very distant, undisclosed location, like Star Wars "In a Galaxy, Far, Far, Away...", premise.

Originally, an attempt was made to make the text that the series name was written in to look "exotic". However, this idea was soon discarded when we evolved the rudiments of the Sothian language, which is written in its own "alien" alphabet. Thus, since the "Earth" part literally is referencing our characters from Earth, it dawned that the font should be straight-forward. Hence the second and third designs, which, aside from color shifting were efforts to push the name of the series to the forefront of the image.

This overt use then seemed too overt and a more subtle approach was taken to the name, matching the understated minimalism that is a hallmark of many, if not most on-line design. This led to the inverted "P" hooking into the normally positioned, and larger, "E". As the "Partisan" aspect of the series is the most erratic element in the overall writing, the off-kilter size and reverse image seemed the most apropos, as we intend to pull the viewer's sympathies in many different directions over the course of the series, and challenge their "Partisanship" over time.

The original chrome look was then disregarded in deference to a more crisp, clear, minimal font - white on the darkness of space, and the image itself was paired down to a 4X4 square. A small planet still hides right next to and below the "H" in Earth, assisting the viewers eyes to the bottom right in order to compensate for the shortness of the the word Earth over Partisan, as well as balancing the hook of the backward "P" pulling the eye into the darkness of empty space on the upper left. 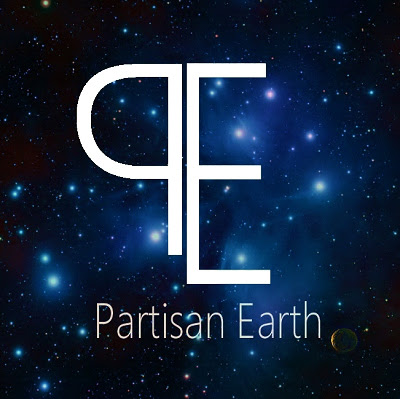