From the Writer's Studio: The Unforgivable Conundrum of Quentin Tarantino 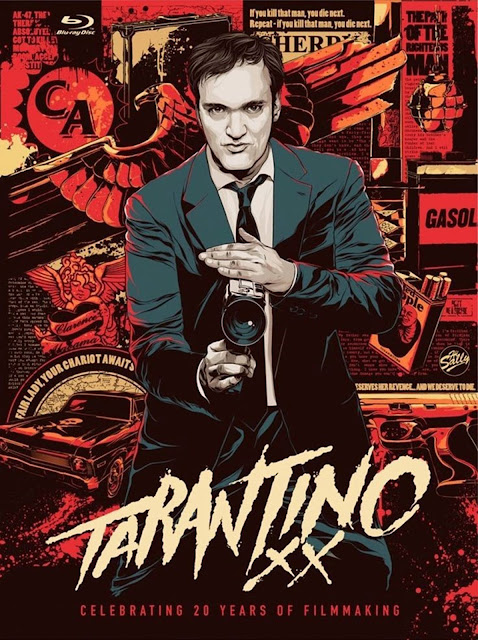 "Quentin, Quentin, Quentin". I occasionally find myself muttering beneath my breath in irritation. It is a rare, yet consistent condition I suffer from, like a form of artistic eczema or a theatrically nagging cough, that I wish were not so, but nonetheless the complaint persists. Now I'm certain a good percentage of otherwise satisfied individuals, who you may be numbered among, might very well respond, "What ever could you possibly find wrong with Academy Award winning director, Quentin Tarantino now, oh, Gauntlet of Balthazar?"

Well, since "hashing stuff out" is an integral part of what social media and blogs are all about, I think this might be a perfect time and place to delineate my seemingly eternal internal battle of pros and cons regarding Tarantino's directing, writing, often smarmy screen presence, and the sub-text presented within his various art products.

So here it is.

Like many film aficionados, Tarantino appeared on my radar with the opening of 1992's "Reservoir Dogs", which was also his first major release. It's a stylish and clever neo-noir crime-thriller which broke new ground, won the fawning accolades of film critics, and perhaps more to the reason that I chose to lay down cash and see it, was that it was a "hit" with many of my schoolmates who held film degrees. Not to be rhetorical, but, what do you think it was that they liked so much about Tarantino? I suspect that it was the sense and feel that young Quentin was very aware of film history, particularly in respect to the manner in which he paid homage to the B-movies of the 1970's that he, we, I, grew up on. His films reeked of the second-hand perfume of Sergio Leone's spaghetti westerns so much so that you could almost hear Ennio Morricone's horn section viscerally interpolated through almost all of his films, from his first outings to even his current works.

His penchant for inserting intentionally "difficult" characters who exist on the periphery of society, and who often display extremely brash, politically incorrect dialog, was welcomed by those who saw Tarantino as fighting the establishment film hierarchy in the same way Lucas and Spielberg had in the previous generation. To this day Tarantino devotees laud him like staunch protective partisans, fighting in proxy the power of the academy, but of course not a critical colleague like Spike Lee so much, 'cuz, he's, uh, you know, a victim identity, so he's off limits. I imagine these fans, in and out of the industry, believe themselves all the more progressive for enjoying Tarentino's films as if they were conducted directly to their minds by some weird form of visual osmosis, and they believe that he knowingly speaks for them, and in a very real way, promotes their agenda, and helps move it forward.

I can find no more an apt anecdote that forced me to scratch the poison ivy that is Quentin to my sensitive skin just a few years ago, shortly after Django Unchained was released. I was serving as a chaperone on a school field trip with my daughter's class to a museum in another city. During the long bus ride there I got to know several of her classmates, all of whom were about nine years of age or so at the time. One young man in her class asked me if I had seen Django Unchained. I responded, "Have you seen Django Unchained?", shocked that such a young child would have been allowed to see a movie that was preceded by an extremely violent reputation. He said yes, and that his parents let him see it and they watched it together, repeatedly. I inquired what was it that he liked about the movie, as he was clearly very taken with it. He quickly replied that he liked it so much because "Django gets to kill a ton of white folk in it". Needless to say, the student was African-American, and though some people, particularly on the left, might find his statements somehow empowering, I view it as absolutely counterproductive to healing racial relations in our country. Mind you, racial tensions, particularly from the African-American activist side, and aimed at the authorities, rose steadily during President Obama's second term, and culminated with the emergence of the Black Lives Matter movement and riots such as those that passed in Ferguson, Missouri. By turning Django Unchained from a slavery epic into a spaghetti western revenge yarn, Tarantino may have given ample room for both white guilt and black anger about slavery to float to the social surface, he also capitalized on the rising tide of hate, as well as using it to virtue signal his own opinion to his peers. At the same time this film was symptomatic of white far-left identitarians encouraging African-Americans to feel universally slighted and to take revenge on "the man". Not them of course, they were "good white people", they meant white people who were different from them. So convenient with an election coming up, huh?

Despite the previous tirade, one of my actual biggest disappointments vis-à-vis Tarantino has nothing to do with his directing or acting, but probably with his screen-writing of his film "Inglorious Bastards", which I otherwise find to be his finest bit of film-making. I understand that right now many of you are probably scratching your head, wondering why the contradiction of such an accolade tethered to the "greatest problem" qualifier with what I'm also calling arguably his best film. So, I'll explain why. 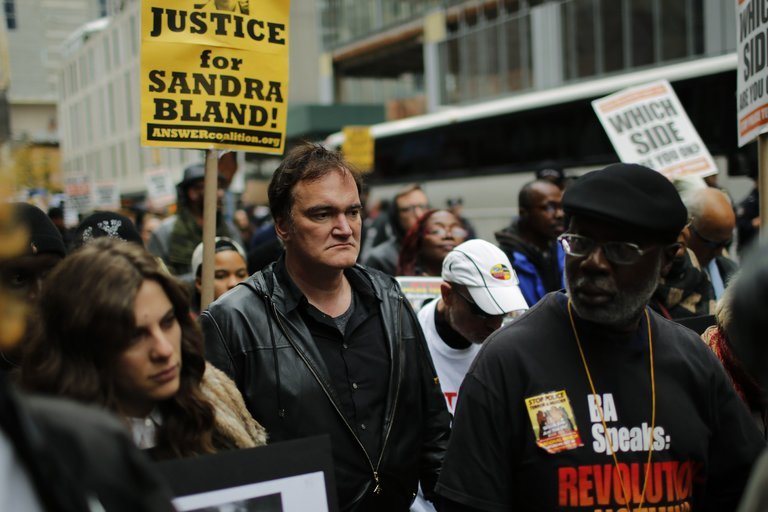 As a script and film, I.B. moves along wonderfully for 95% of its length. It is shot beautifully, it is intriguing, acted very, very well, and is highly suspenseful, until the last five minutes. All of the time the viewer invested in the film falls away as the Sex Pistols blare in to an over the top melange that seems like a child's daydream. All sense of reality and the suspension of disbelief is exchanged for a fantasy where Tarantino virtue signals to the world that he hates Nazis (No way!, it must be only you and Antifa Quentin!) and in this fantasy gone wrong, he has the Jewish female protagonist and her American aides literally kill Adolf Hitler and his senior staff. Obviously this event never occurred in reality and my disbelief, bordering on the suspicion that this might have been a story taken from life was shattered beyond recognition. I had apparently just wasted two hours of my life investing in a story that ended up being an absolute fantasy yet seem to be presented as an almost real story. This was just another virtue signal of the highest order, with Tarantino messaging his peers that he is indeed a champion of anti-fascism, social justice, black empowerment etc., etc. 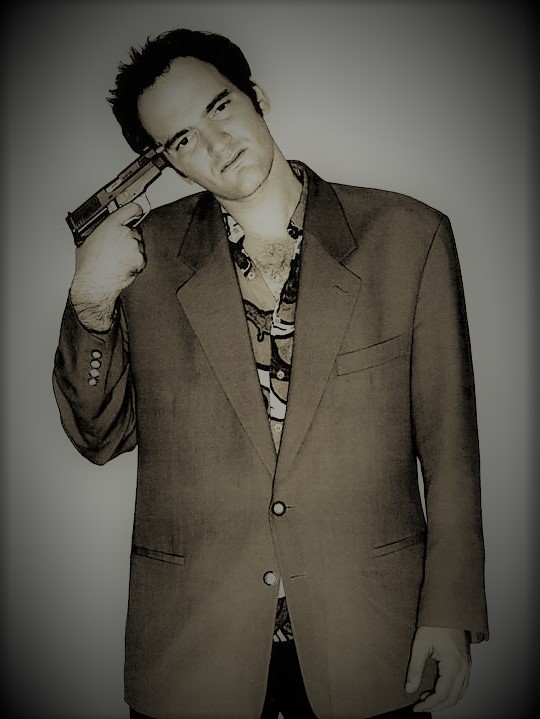 Like James Cameron, who I slammed in a previous post here for his overt promotion of the progressive Marxist-globalist agenda in his film Avatar, I believe Quentin is guilty of the same charge. In addition to his consistent signalling, he often casts himself in his own films as a character who annoyingly pushes around other characters who in real life would have none of it, reflecting either his personal need to be powerful, or in an attempt at making social commentary about certain types of people who would push around even tougher people or people who are in oppressed identity categories. He is thoroughly not enjoyable to watch as an actor, and I have many questions about his motives as a screenwriter, but I have to admit he is an extremely talented director. So, I'll give you that, Q.T.

Perhaps one of the most well-known images associated with Quentin is "Pulp Fiction", which deals with gangsters in all of their uncharacteristic retro pastiche oddness. Likewise "Jackie Brown", which was a homage to the "blaxploitation" movies of the '70's, and does not obscure its intentions, much. But  aside from Django and Basterds the other film of his that I have a major problem with is one that he did not direct - "Natural Born Killers". This gratuitous and macabre tale glorifies a dysfunctional couple's anarchist-tinged killing spree as somehow a wonderful political statement of the disaffection that modern youth have with modern culture. This was, I felt, a point made much more cogently in Malcolm McDowell's 1968 debut film, "If" - the story of a young man at a British "public school" who decides that the system of societal controls should be removed by him and his like-minded nihilistic friends, by hyper-violent means. A great film, and much less syphilitic than NBK.

As result of Tarantino's endless virtue signalling, his manipulation of different identity groups, and his espousal of the progressive agenda as a bridge in his relationships to people within the Hollywood elite, this make him seem to me all the more predictable. Certainly by now it is clear that I find Quentin irritating to watch on screen and in interviews, but I also suspect that he might be interesting to socialize with, and I'm certain his wonderful knowledge of film history is probably quite impressive. Nonetheless, he irritates me to no end, but, unlike Rodger Waters I will refrain from awarding him the Gauntlet's "REGRESSIVE RETARD OF THE MONTH" (or YEAR) award , but I will still hold him in general contempt, of the Cameron-Avatar sort, for what I feel is his duplicitous and opportunistic tactics in promoting his agenda and ruining the experience of his films for me...not that he would care in the least.