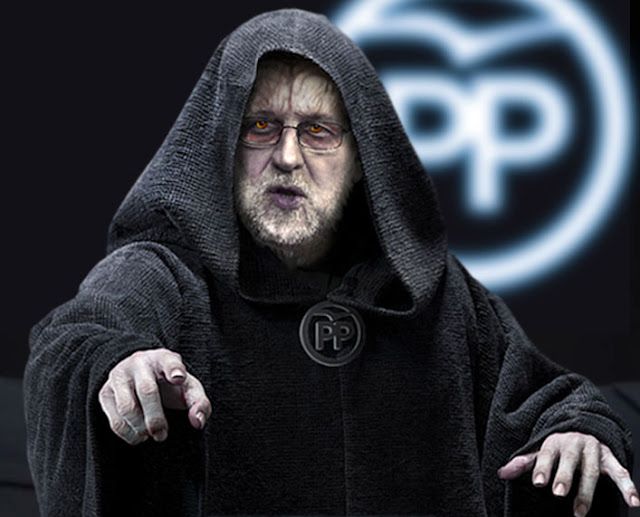 Since the Gauntlet's last foray into Catalan subject matter "Double Down!" clearly seems to be the agreed upon policy of Spanish Prime Minister Mariano Rajoy and his European Union enablers. Their overtly Fascistic tactics and dismissive rhetoric speak volumes to their unswerving dedication to the Marxist agenda of regional micro-globalist European Collectivism, which has now subsumed, or rather, has funneled, many European's Nationalist tendencies into a synonymous parity with that seemingly contrary ideology.

Spain's Post-Franco, Post-National, Collectivist "nationalists" dismiss the notion of Catalonia's proposed departure as illegal, divisive, reckless, traitorous, and I'm sure even immoral. Personally, I don't blame them one iota for their reasoning, at least as relating to Spain's overall economy, and their gripping fear of losing the cash cow that Barcelona generates for the nation as a whole, but, we have an interesting, or perhaps a disturbing, bit of indicative cognitive dissonance here that should be pointed out.

QUERY: If you are a confessed Collectivist who ardently supports Pan-Ethnic Regional Nationalism, and you likewise support the active Fascistic repression of the diversity of identity and thoughts of your fellow citizens by the military arm of the State, how, oh how, are not almost literally identical to another, earlier political party of German Nationalist Socialists, who, albeit they held a very different and specific set of racial motives, remain notorious to the world as a whole?


So, in light of this question burning in the back of my mind, it came as no great surprise (after the initial head bashing), when some 350,000 Castilian activists took to the street in Barcelona in a counter protest to declare Catalonia's "indivisibility" from Spain as a whole, and the event took on, well, a Fascistic demeanor.

While I have stated my concerns about how far left the Catalan separatist movement leans, especially since you can easily spy the Anarcho-Communist Syndicalist flag flying at referendum rallies, I nonetheless have far greater concerns about Nazism manifesting as misplaced European Union Micro-Globalism. 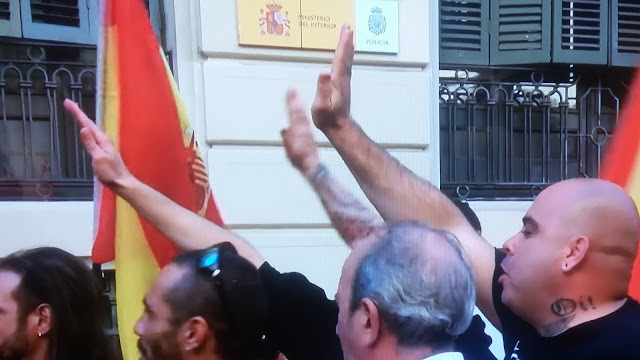 Sure, I support everyone's right to express an opinion in a democratic society, in the marketplace of ideas, but, even without any racial under, or overtones, Statism of this sort does not aid the Gauntlet's agenda of helping the world move firmly away from Marxist Collectivist Globalism on the micro, or macro scale.

I'm certain leftists are in quite a philosophic bind right now regarding the issue of Catalan secession. After all, the Socialists actually tend to adore the idea of Collectivism, and think that organizations like the UN, NAFTA, the WTO, and the EU, all reflect a swell, Star Trek-like Positive-Futurist Utopian philosophy that will move Global Marxism, and the earth as a whole, forward to a greater future.

At least in theory.

But what's a leftist to do when their fellow partisans betray their innate fascistic tendencies to the media so overtly? Don't they know not to play to the cameras?

Well, they can always do what the left has repeatedly done in response to Antifa violence in US riots, by downplaying it, or even praising them as heroes, or they can handle the matter like Mariano Rajoy did, and double down again. A triple down, if you will.

I have to say, back when the left WAS the liberal counter-culture, we could rely on them to stand up to the bullies, well, at least most of the time, that is until they became too enamored with, and indoctrinated into, identitarian intersectionalism and Marx's demented ideology, and they fell blind to the abuses of Communist and Socialist states and became apologists for monsters like Josef Stalin, Fidel Castro, Che Guevara, etc, etc.

Sadly today the left IS the establishment, at least in regard to media, academia, and the culture war in general, and they must be having a hard time playing both sides. After all, you can't be the establishment and the counter-culture at the same time, that is just a schizophrenic ouroboros. But, since real Conservatives and Libertarians were pushed to the fringe in most western nations, they were forced to take on the mantle of our shared Classical Liberal values and the fight to preserve democratic rights. Whether or not you want to believe this paradigm assertion is up to you as an individual, of course, but if you reject it out-of-hand, you may want to look at your own doctrinal biases and analyze just how much, and in what ways, Marxist indoctrination has effected you.

But back to Catalonia. 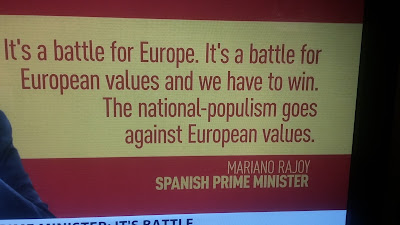 In the wake of the Spanish Police smashing in the heads of numerous old ladies peaceably demonstrating in the streets of Barcelona, not only did the European Union authorities repeatedly ignore pleas for aid in negotiating a peace between Catalonia and Spain from the Catalan President, Carles Puigdemont, as predicted in the Gauntlet's last Catalonia article, France's Obama-like Prime Minister, Emmanuel Macron, has indeed continued to push the notion that this sort of separatism is indeed the very reason that justifies the need for an European Union Army.

Clearly, Mr. Macron is set to lead this charge, and in light of his swelling Fascistic-Socialism we must remember that when he was sworn into office a few months ago, that he was presented to the French public to the tune of the European Union Anthem rather than the French National Anthem; the Marseilles. For those of us who lean right, this of course seems overtly disrespectful, if not outwardly treasonous. Not technically, of course, but in regard to emotional sentiment, it amounts to the same.


Still, this all comes down to the people. The Catalan people. 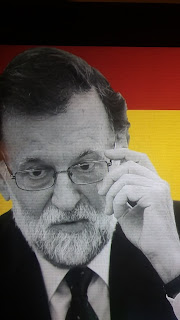 Rajoy could have easily sat down and negotiated with Puigdemont, and belabored the process of Catalonia's dissolution from Spain for another twenty, or maybe even fifty years. Madrid putting programs on the table to insure some measure of the autonomy of Catalonia and bolster the continuance of the Catalan language and culture, as well as passing some tax abatement initiatives could have gone many kilometers to temper the zeal and immediacy of this issue, which frankly has been on a long simmer since the year 1714.

I mean, think about this in interpersonal terms. If one lover wished to leave another, what pushes them out of the door faster, threats and abuse? Or does a little sugar get them to rethink their speedy departure? Sure, the unhappy lover might not stay forever, but the process of letting go can be orchestrated to gracefully slide into independence rather than into out and out conflict and abuse, as Rajoy and his thugs have implemented so incompetently on the streets of Barcelona.

Of course, we will have to watch closely and see how this situation continues to evolve, but in light of his lack of insight and fascistic actions in regard to the Catalonian secessionist referendum issue, I am forced to award Spanish Prime Minister, Mariano Rajoy Brey, with the Gauntlet of Balthazar's "REGRESSIVE RETARD OF THE MONTH" Award for October, 2017.

Keep up the great work in doubling and tripling down, Mariano. Your emulation of Francisco Franco is all but flawless, and by doing so you are giving a great helping hand to the Anti-Marxists of the world in their goal of more promptly dissembling the European Union. Oh, and by all means, accept my congratulations once again on your award.