From the Writer's Studio: "Clowns to the Left of Me, JOKER to the Right - Stuck in the Middle with You". The Gauntlet Reviews JOKER. 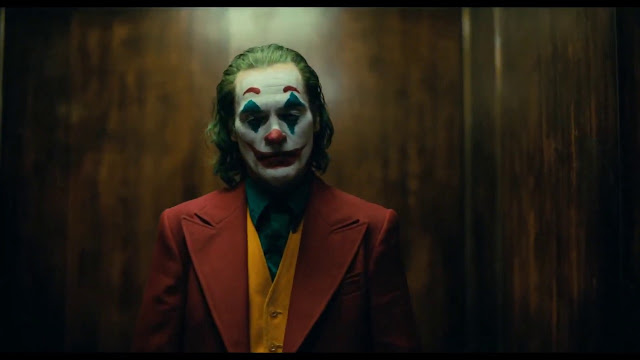 Well, it looks like I’ve finally gotten around to penning my review of DC’s “Joker” (2019), featuring Joaquin Phoenix as the dysfunctional antagonist-protagonist, Arthur Fleck.

I should mention that while I'm a fan of superhero (or super-villain) films, in my youth I was far and away much more into the Marvel brand than DC. Nonetheless, “Joker” is not the usual sort of comic book adaptation, with the closest parallel perhaps being the X-Men derived series “Legion”; which also features a protagonist with delusional psychosis. Regardless, Arthur’s mental illness is primarily characterized by radical mood swings between tragic melancholy, violent anger, and disturbingly manic giddiness. However, he also occasionally blurs the line between outward reality and his internal imagined reality - so, bi-polar schizophrenia? I personally think that the filmmakers were going for the touch of the old maxim, “in an insane world, it's the sane man who appears insane”, but let’s face it, not- withstanding any post-modern moral relativism re-write, the Joker is coo-coo for cocoa-puffs.

I’d like to break this review down into a few elements; the first being some general observations about various aspects of the film making, then the screenwriting, then the movie’s influences, and lastly, the political context of the film. 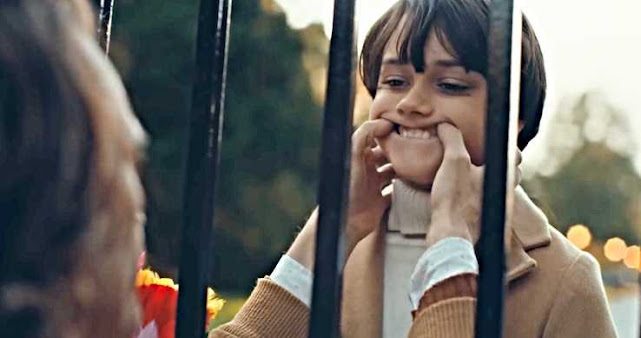 So first, what I liked about “Joker”.

Joker is remarkably filmed, with some nice establishing shots. It is consistently lighted, comprehensively designed, adequately edited, and Joaquin’s acting is, well, it’s impressive - not- withstanding that he is almost typecast to play characters with mental, emotional, or substance abuse problems.

The film holds the viewer’s attention, tightly, and the script is solid. At times the dialogue is fairly minimal. The only deviation from the original comic book origin of the Joker is that in this revision there’s no mention of Arthur’s immersion in a vat of chemical waste, which frankly, could have played nicely into a botched suicide attempt by the protagonist, as the film gen- erally chronicles a man being beaten down by life one nail at a time.

But hey, that's just me.

Supposedly set in “Gotham City”, the film appears as mostly identical to the Kingsbridge and Spuyten Duyvil sections of the North Bronx, New York circa 1979-1984 - graffiti covered subway train cars and all. As someone who grew up nearby, this was an eerie flashback to my youth, and I can’t count how many times I trudged up the massive set of steps located at 237th Street, which Arthur desperately scales, and euphorically dances on, throughout the movie. 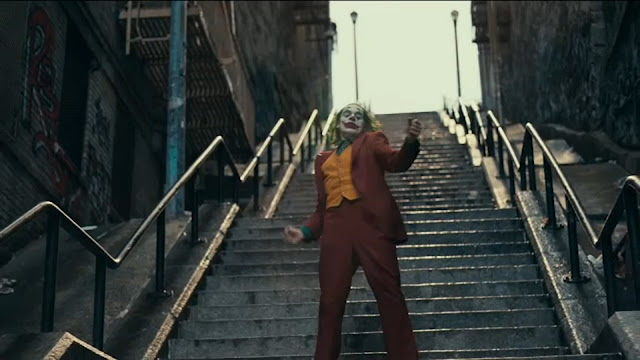 The story is fairly simple.

Arthur lives with his elderly (and ill) mother in a dreadful apartment while barely eking out a living as a paid clown. He is essentially a modern Incel, and aside from his mother, the only other relationships he seems to have are with a state-appointed social worker / shrink, and his co-workers at the clowning agency. He is infatuated with a fetching neighbor, but from afar. We learn early on that government funded has been cut and that his therapy, and the medicine that comes with it, will be coming to an end. It’s a nice element, (an information bomb, as I like to call it), because it creates a sense of impend- ing doom as we expect this will just accelerate Arthur’s slow descent into violence.

This motif is paralleled by a literal “Chekhov’s Gun” being introduced in the first act, after Arthur is attacked by gang of miscreant youth, and a co-worker offers him a handgun for protection.

Needless to say, the Wayne family plays into the story, and we learn that Arthur’s mother was once a maid in Wayne manor. We also learn that she may have imparted her own psychosis through hereditary to Arthur, and as the film progresses he makes several discoveries about his origins that further push him over the edge. Within reason Arthur feels that everyone in his life is either mocking him, is insincere, or is flat-out lying to him, and thus, he begins to take action, or rather, revenge. 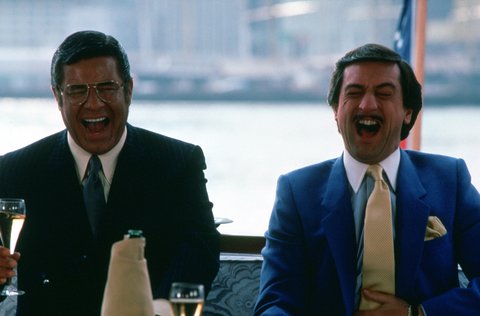 There are three or four filmic antecedents that immediately come to mind when watching “Joker”.

The obvious would be Heath Ledger’s portrayal of Joker in Dark Knight (2008), but that’s a minor thematic parallel. What is more visceral are two Robert De Niro films originally made in the period presented in Joker. The first is “The King of Comedy” (1983) and second is “Taxi Driver” (1976).

De Niro appears in Joker as a late night talk show host, Murray Franklin (a homage to Joe Franklin?) assuming the Jerry Lewis role in “King of Comedy”, while he played a delusional comic, similar to Arthur, named Rupert Pupkin, who is so desperate to gain notoriety; that he kidnaps the host in order to force his staff to allow him to guest host an episode of the show. While “King” possesses a similar theme to Joker, the descent into violence seen in Joker is actually more reminiscent of De Niro’s passive-turned-vigilante cabbie in Taxi Driver.

This element was also manifested in Michael Douglas / Robert Duvall film “Falling Down” (1993), which chronicled a middle of the road guy snapping and going on a violent rampage across Los Angeles – so, another relationship.

The Politics
When Joker first came out there were a number of media reviewers who immediately labeled it a “white supremacist” film. These were of course the same people who effusively lauded “Black Panther” (2018), which I might remind, presented a zenophobic isolationist ethno-state that regularly engaged in wars against their own nation’s minority ethnic groups, and covetously guard their intellectual property and maintain an immigrant-free impenetrable border. Had the characters in Black Panther possessed white faces, those brilliant geniuses would have rightly noted that the paradigm was borderline Hitlerian, but hey, maybe they’re just that simplistic and aren’t capable of seeing politics and philosophy past melanin. 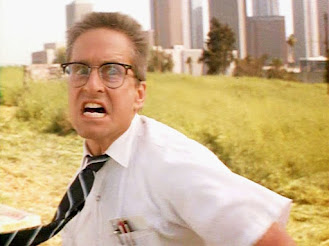 Anyway, I was puzzled by their assessment, and still am. I understand that clowns wear “white face”, but these reviewers couldn’t be so uninformed to think that lead white paint, which evolved in bubonic plague ridden Italy, and probably mimicked a dark irony about the unimaginable scale of death occurring all around them, was somehow tied to current issues of American race divisiveness. 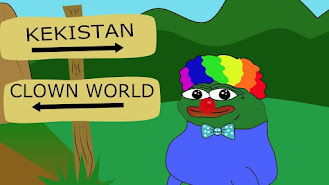 In the aftermath of the film’s release and the scuttlebutt about clowns being racist, the meme gurus of 4chan soon created the rainbow-wigged “Honkler the Clown”, obviously a making reference to “Honky” – an outdated Black slur against white people. The leftist mob ate it up and, as expected, they declared that this indeed confirmed their suspicions and that clowns were indeed a symbol of white supremacy, just like Kek / Pepe the frog. While the ease by which 4chan manipulated the paranoia of Marxist-inclined 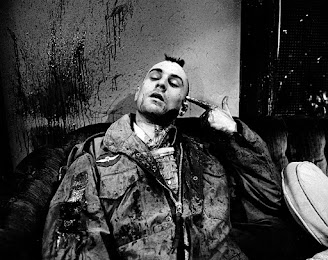 folk is humorous, the Libertarian fellas at South Park chimed in with “Mexican Joker”, making light of not only the clown meme, but also of school shooters emulating Joker.

Near the end of the film there are widespread anti-capitalist riots (inspired by Joker) which all but prophetically look like real life in leftist-dominated urban areas of America in 2020. Mind you, De Niro has been an almost brutish and outspoken adversary of President Trump, and Phoenix is likewise an Eco-warrior, so pretty much leftists who have been conditioned to reflexively fight back against those who either don’t agree with their ideology, or at the very least, don’t politely lie down and shut their mouths – unlike street-fighter Trump.

I personally think that all of these films - Taxi Driver, King of Comedy, Falling Down, and Joker, all actually reflect an internal cognitive dissonance within leftist psychology, and not at all in those to the center and right. The latent violence and authoritarianism of the left has become globally visceral and visible over the last few decades, yet this is routinely suppressed or re-framed by the media, or I should say, their media.

The far left generally has always sought to radically change society, (and even human nature) forcefully if need be, and they are fine with compulsion, media warfare, collateral damage, fire and death, in the name of their utopian end goal, yet, handguns – they’re “icky”. They have historically advocated for blacks and other minorities, yet they do this with the soft bigotry of low expectations, and of course, as a general rule, these valiant nobles have no black friends.

Let’s be honest here, it’s leftists that fantasize about reliving past protests movements…and epic riots, and are apt to rampage through the streets. Their elected representatives will not condemn, and even express admiration, for masked fascists who terrorize the public and murder blacks while insisting they are ant-fascist and pro-black.

Joker, in my opinion, is symbolic of the cognitive dissonance between positive change and radical destruction creates in the leftist heart. Yet while the Joker is sympathetic to the cause, he is still at heart only interested in his own agenda - motivated by revenge and chaos.