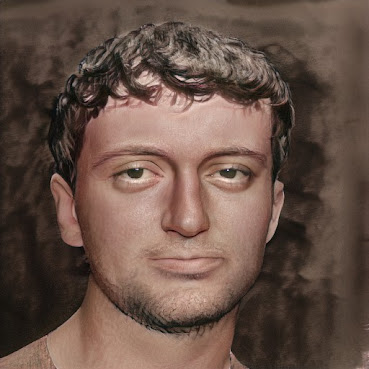 Welcome to, or back to, the so very wicked, yet surprisingly do-gooding, Gauntlet of Balthazar.

Today I'd like to address a recent fascination I've discovered - Algorithm Assisted Portraiture. Initially I explored these sort of programs as a tool to help coalesce pre-production visual design for characters featured in the scripts and projects my company, Nevekari Enterprises, had / has been holistically developing.

While this is only half "art" (meaning not from scratch), I soon realized that the programs (such as Artbreeder) could be applied to historical personalities and the like. Of course, as a fairly Zionistic chap, I always bemoaned the fact that the Jews of ancient times held to a strict human images=idolatry policy, and thus, rarely depicted themselves in the graphic arts, with the exception starting with the stylized figures found in the Dura-Europos Synagogue mosaics from 3rd century C.E. Parthian Syria.

But, what of the Judean homeland before the devastating occupation, enslavement, genocides, and dispersal of the First (66-73 C.E.) and Second (132-135 C.E.) Roman-Jewish Wars? While there are human figures represented on coinage found in the Levant in the period, it almost exclusively depicts notable Greek and Roman religious icons or political figures, or in the case of Nabatean silver, their very, very stylized monarchs.

So, being left only with Roman busts of prominent Jews who assimilated into Roman culture, I looked to see if the algorithms could assist me in creating what amounts to as more or less real life portraits of Judeans of the First Century C.E. Obviously two portraits do not a diverse population make, but I think these are pretty good representations of a general "look". Heck, if DNA extracted from Galilean skeletons is any evidence, there was a fair amount of genetic homogeneity in the region as the result of prolonged intra-cultural endogamy.

The two personalities that stood out the most were the Jewish General turned historian Yosef ben Matiyahu - otherwise known as Titus Flavius Josephus, or simply Josephus (above left), and the other was the Hasmonean King Herod the First, otherwise known as Herod the Great (below right). Ethnically it should be pointed out that Josephus was purely Judean, and a Kohen (priestly caste) at that, descended from Jonathan Apphus - the brother of Judah the Maccabee, and by extension through a long pedigree to Phinehas, the grandson of Aron, of Exodus fame. 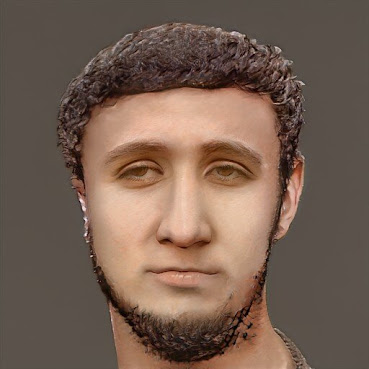 King Herod on the other hand was the son of Antipater - a high-ranking official from Idumea (around Beersheva), whose mother was a Nabatean Arab woman named Cypros (probably from the other side of the Jordan River). The Idumeans were an ethnologically very closely related people to the Judeans (i.e. descended from Esau), who do not appear to be linguistically or physically that distinct from Judeans, Galileans, or Samaritans, and prior to Herod's birth, the tribe was en masse in the process of being absorbed into mainstream Judean culture. At times this acculturation was consensual, but at other times the less compromising zealots of Judaism would sort of, well, force the issue, with swords and stuff. The Nabateans (who wrote their language in Aramaic characters) were a "Judean-friendly" pagan Arab tribe, and who for the most part eventually opted for their own version of Christianity, before being absorbed into Islam. Their genetic descendants are today any Arabs affiliated with the Al-Azd tribe - which is spread throughout the middle east. While this technically makes Herod a convert to Judaism - and a Hellenized one at that, rather than an ethnically "pure" Judean, it should be pointed out that great numbers of Idumeans fought and died alongside ethnic Judeans in the Roman War, and were from all reports more or less indistinct from one another (at least, I suspect, from a foreign perspective). Overall Idumeans played an important role in the evolution of First Century C.E. Jewish culture and Judaism, and supplied such stellar visionaries as Akiva ben Yosef, otherwise known as Rabbi Akiva - one the key contributors to the Mishnah, or Rabbinic law.

All in all I think the two portraits came out fairly well, but if you are interested in the reference material of the original statuary it's easily available through a quick web search of Josephus or Herod. Some other images I looked at were Nabatean coins bearing the image of King Malichos II from 40-70 C.E., as well as a Neolithic mask found in the Judean desert that dates from about 9000 B.C.E. Neither is exactly Judean, but the latter does shine some light on what the folk who lived at Jericho in pre-biblical times might have looked like.

I'm fully interested going even more forensic in building out features from period skulls excavated in the region. And hey, some Philistine faces would be quite nice to recover.

Anyway, that's about it for now.

Email ThisBlogThis!Share to TwitterShare to FacebookShare to Pinterest
Labels: Art, From the Graphic Design Studio, Judaica