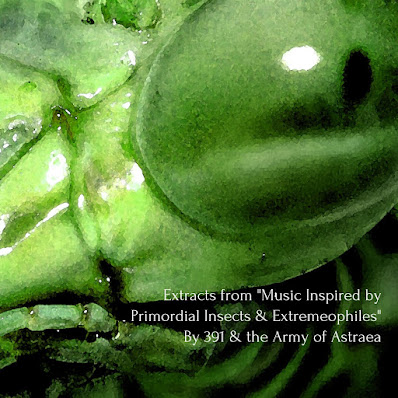 Good morning, or afternoon, or evening, depending where you are, or um, when you're reading this, oh hopefully recurring visitor to the Gauntlet's little den of iniquity. Regardless, I'd like to welcome you to yet another Tuesday record release. 'Cuz Tuesday is the right day!

Today's issue is a part of a recent, and I suspect forthcoming, effort to retroactively release a number of recordings that were completed a number of years ago, but are just sitting there, like a lazy, lazy dog. While many of these recordings are fully "archival" - in that they were made far too many years ago than I'd like to admit to (such as "Stubborn God Productions: Working Backwards '84-'96"), the others are from just a few years ago, like today's collection.

The first issue in this phase started with the release on Bandcamp in November 2020 of the "Partisan Earth Soundtrack Sampler EP". First recorded in 2012, the Partisan Earth DVD / CD soundtrack originally came in at 22 tracks, and so, rather than re-issue the full album, four pieces were selected and remixed as a Sampler EP. Likewise, 2014's "Music Inspired by Primordial Insects & Extremophiles" also boasted 22 tracks, but for the sake of the sampler I've picked just four of the tracks and remixed them for this release. Whether or not the four tracks I've selected are a perfect representation of the diversity of the original album is left to be seen, but in general, I think they go together and follow each other well.

I must admit that a good chunk of the original recordings are fairly atonal, and as the name implies this is an extremely experimental concept piece of industrial-electronic music that goes in some very eclectic directions. While they are definitely heavy on synth & rhythm programming, there are good amounts of guitar (sometimes de-tuned) and bass present as well, and influences jump from dreamy nursery rhymes to Throbbing Gristle, and from classical music to Robert Fripp and Brian Eno.

Anyway, I hope that at least some of you appreciate this small glimpse into another project resurrected from the oblivion of computer storage. Obviously if you do, please feel free to share, and follow 391 & the Army of Astraea on Bandcamp, or on Soundcloud, and to like Stubborn God Productions Facebook page.

The player is embedded below so you can listen here, but if you go to Bandcamp, you can download the "Music Inspired by Primordial Insects & Extremophiles Sampler EP", or other recordings, and even donate to the cause if you so choose to.

Anyway that's about all for now. Till next time.