An Abbreviated User's Guide to the US Presidents: What’s to Like, and Dislike, About Each? (Part One of Three – the First 15) 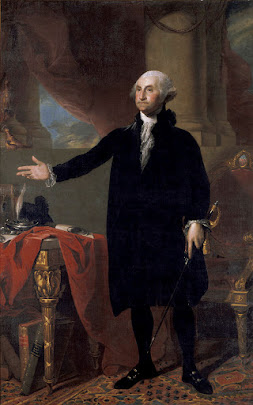 Welcome to, or back to, the mighty, and often verbose, Gauntlet of Balthazar, for a review of sorts – in anticipation of the 245th Independence Day of the United States of America from Great Britain. So, uh, patriotic, I guess.

Obviously, there are occasional flurries of political content here on the Gauntlet, but having previously examined the social and philosophical evolution of the various political parties over time (yes, I know, that series isn’t complete yet), it seemed like it might be a good idea to simplify the matter by compiling a list of all the Presidents, and giving a brief take on each - looking at 15 at a time in 3 neat installments.

For those of you who like your history simple, this just might do it for you. But disclaimer: I’m clearly biased, and this is pure opinion. However, I think it’s part of an historian’s duty to look at each man’s legacy in retrospect, or in the present case, to forecast with as much perspective as possible, how the person will be perceived after time has passed.

If you’ve visited here before you probably have seen the description “Neo-Whig” thrown around as a general synonym for the right-leaning Libertarian inclination, but the original Whigs get no special quarter in this review. Likewise, Republicans and Democrats do not lose points just due to their party affiliation, but because of their support of bad policies, or other failings. To be fair, it should be noted that the Gauntlet considers Globalism, Socialism, Elitism, Ethno-Nationalism and / or Racism, Neo-Liberalism, and Neo-Conservatism, Kleptocracy and Corruption as part-and-parcel of bad policies and failings.

The rating system is more intuitive than data driven, but positive accomplishments; such as the passage of sound and enduring laws, economic prosperity, effectiveness in war, infrastructure development, and overall growth, are the key components. Since the United States has rarely been at a complete state of peace since the founding, it’s probably not a fair litmus, but domestic tranquility could mean something. Then again, that has been in short supply since the late 1960’s.

So let’s begin at the obvious place – with the first 15 Presidents, who collectively held office from 1789 to 1861.

1. George Washington (1789-1797) – George was not the greatest General, made some questionable decisions, and was known for his self-motivated business savvy. I guess it is somehow fair that he held both black, and white slaves, but, ugh. However, he was wise enough to turn down a kingship, and smart enough to grasp that the new nation required a symbolic figure to bind disparate voices together, and that figure might as well be him. Thus, he very rightly would not back either the Adams or Jefferson camp's, and stood as a true Independent as well as a staunch isolationist – both essential stances for that embryonic period. Oh, and wonderful public relations and media influencing. Gauntlet Rating: 8.5 Raised Gauntlet’s out of 10.

2. John Adams (1797-1801) – for all of his seeming lack of social grace, John was instrumental in setting up how the Republic was to work. As the founder of the Federalist Party, he was a rule of law sort of guy, who required justice (admittedly, the Alien & Sedition Act went a tad too far), philosophic accord, and felt that the American people were at heart moral and good. His belief system was the starting point of the various threads that would lead to the formation of the Republican Party. Oh, and it's definitely weird that both he and Jefferson died on the same day - July 4th, 1826. Gauntlet Rating: 8.25 Raised Gauntlet’s out of 10.

3. Thomas Jefferson (1801-1809) – Jefferson was a stone cold genius (for goodness sake, he designed the office chair and edited his own version of the Bible), who penned the Declaration of Independence, the Freedom of Religion Act, and Banned the Importation of Slaves. Bonus – the Louisiana Purchase more than doubled the size of the nation. Jefferson was also the first President to tackle injustice abroad by giving the North African Barbary pirates a solid beat down. Given, his reason was that they had taken Americans and Europeans as slaves, and he did not want to pay ransom, and did not free his own slaves till he was on his deathbed, but still, his unbridled support of liberty with civic responsibility can be seen as the foundation stone of Libertarianism. Gauntlet Rating: 9 Raised Gauntlet’s out of 10.

5. James Monroe (1817-1825) – Well, this is the first shaky one. Monroe signed the Missouri Compromise, which admitted Missouri as a slave state, and thus, appeased the growing pro-slavery block that eventually led to the Civil War, even though he was theoretically against slavery. The Monroe Doctrine was a good potential starting point for New World unity, but generally, Monroe is a mixed bag. He was allied with Aaron Burr, so against Hamilton, and by extension, Adams, so, blah. Then again Hamilton was a tad prickly. I guess his support of free slaves colonizing Liberia was something. Gauntlet Rating: 6.25 Raised Gauntlet’s out of 10.

6. John Quincy Adams (1825-1829) – the son of John Adams, and the first, non-founding father to serve as President, the best thing about old J.Q.A was that he co-founded the Whig Party (though he was not elected as a Whig). Later the Whigs (named for the wigs the founders wore), absorbed not only most of the Federalists, but the Jeffersonian Republicans as well, into one party that was on one side Conservative and on the other side Liberty based. While Northern and Southern Whigs had some variant ideas about how to oppose (or ignore) the institution of slavery, they eventually founded the National Republican Party, which under Lincoln re-minted itself the "GOP". Gauntlet Rating: 6.75 Raised Gauntlet’s out of 10.

7. Andrew Jackson (1829-1837) – Oh, Andrew, there are so many good things, and so many bad. Such spirit! Such force of will! The first populist President - the will of the people had spoken, and they wanted a no-nonsense war hero, who opposed the power of banks, and particularly, the creation a national private bank like the Federal Reserve. Under Jackson the budget was balanced and we had almost no debt. But, the Democratic Party, created to ferry Jackson into office, was firmly founded on a pro-slavery platform. So there’s that. Jackson also killed the hell out of the Native Americans. Gauntlet Rating: 7 Raised Gauntlet’s out of 10.

8. Martin Van Buren (1837-1841) – Marty baby, as a native New Yorker I hate to be against the first President hailing from our shared birth state, but his policies where more or less a continuation of Jackson’s, including a ton of Indian Removals. His best moment seems to be his opposition to admitting Texas to the union as a slave state, which in retrospect was a middle-of-the-road stall. While his positions angered many, including Southern Democrats, Martin did eventually support Abolitionism and President Lincoln. Gauntlet Rating: 5 Raised Gauntlet’s out of 10.

9. William Henry Harrison (1841) – This Whig candidate designed to oust Van Buren didn’t fair so well as a President, and died of pneumonia just 31 days after his inauguration. Thus, it’s hard to have an opinion of W.H.H. Gauntlet Rating: 1.25 Raised Gauntlet’s out of 10.

10. John Tyler (1841-1845) – John Tyler was W.H.H.’s Vice-President, and was inaugurated after his sudden demise. Unlike many pre-Civil War administrations, Tyler was part of the same party as his former boss and was a Whig. He was initially a Virginia Democrat, but opposed Andrew Jackson, and moved on. Tyler was a full Nationalist, a proponent of State Rights, and a firm believer in Manifest Destiny, which led him to later side with Confederacy. The general take: all-in-all a just above average prez. Gauntlet Rating: 4.75 Raised Gauntlet’s out of 10.

11. James K. Polk (1845-1849) – A disciple of Jackson and a Southern Democrat, Polk was another pro-slavery Democrat (what a shock!), and is chiefly remembered for his victory in the Mexican-American War, which added more states to the union. Somehow this guy beat Henry Clay, (the Whig Party founder), for the Presidency. Most historians rank him fairly highly for the amount of achievements he tallied in his one term. But, he's another "shouldn’t have been", might be a better assessment. Gauntlet Rating: 5 Raised Gauntlet’s out of 10.

12. Zachary Taylor (1849-1850) – A Taylor after a Tyler? What are they trying to do? Confuse us? Anyway, another military man, and a Southern Whig, he was in office for just over a year, and died of some kind of stomach infection. The Gauntlet’s take: all in all, totally forgettable. Gauntlet Rating: 3.25 Raised Gauntlet’s out of 10.

13. Millard Fillmore (1850-1853) – Weird name, and the second New Yorker on the list (well, at least from rural upstate), Millard Fillmore, Like John Tyler, was a Vice-President who finished out a term of a President who passed away unexpectedly. Sounds like something in the works right now, huh? Regardless, he was a member of the Anti-Masonic Party, and was favorable inclined to the Mormons, (though not a Mormon himself), so let’s just assume a nineteenth century conspiracy theorist. He passed the not very nice Fugitive Slave Act, which is weird (and uncharacteristic) for a Northern Whig, but on the good side of the ledger he opened friendly diplomatic relations with a number of up-and-coming Far Asian nations. Gauntlet Rating: 4.25 Raised Gauntlet’s out of 10.

14. Franklin Pierce (1853-1857) – Franky, Franky, Franky, between Whigs trying to sweep slavery under the rug, and Democrats decidedly defending it, the Presidency had been dominated by the South for years. Increasingly, the Republicans (or, okay National Republicans) and Abolitionism were becoming one-and-the-same. Saying that, though born in the north, Franklin Pierce was decidedly anti-Abolitionist in his leanings. A drunk, he is remembered, or not remembered, as one of the least impressive Presidents. Gauntlet Rating: 2.5 Raised Gauntlet’s out of 10.

15. James Buchanan (1857-1861) – An absolute puppet of the slavers, this douche was thoroughly unbearable, and it’s no surprise that he was the last President before the Civil War. Gauntlet Rating: 1 Raised Gauntlet’s out of 10.

Well, that's about all for now. I hope you enjoyed this brief bio-based post. Stay tuned for Part Two - the next 15, from Lincoln to Hoover.