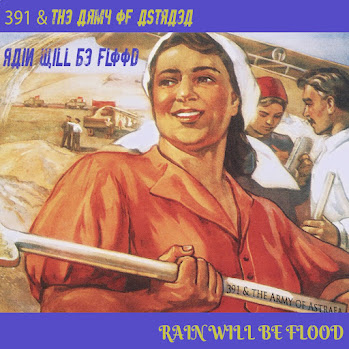 Welcome back to the Gauntlet of Balthazar for a slightly delayed "new" release Tuesday by 391 & the Army of Astraea. Between the lazy days of summer, a number of unfortunate distractions, and juggling far too many projects, it's clearly been fairly slim pickings around here, but nonetheless, voila, a music upload.

Today's track/s are packaged as an A & B side of a single updated from their original and unreleased mixes - extracted from a 2015 six-track demo EP. As such, these two moody pieces, "Rain Will Be Flood" and "Blizzard of Scallions", have been updated in order to "fill the gaps" in the Army of Astraea's back-catalogue.

As far as the tracks go, "Rain Will Be Flood" is broken into three distinct parts and attempts to aurally capture the "feel" of an impending rain / thunder storm, moving from lackadaisical moodiness to aggressive persistence and finally to the manually triggered percussion solo that makes up the last minute-and-a-half, or so. On the other hand, "Blizzard of Scallions" was partly inspired by my late father, as well as (probably) early 1970's Pink Floyd. It was part of the soundtrack to the 2018 documentary video; "Nevekari Talks: The Supplicant" - an interview reel that promoted the award-winning script of the same name. www.youtube.com/watch?v=grQy5CfWY5E

The cover art is in the same vein as several other 391 releases, such as the "False Flag" and "Space Force" EP's, and features similarly augmented vintage Soviet propaganda poster art presented in an ironic manner.

Anyway, the embed is below, so please do enjoy, share, and follow 391 & the Army of Astraea on Bandcamp and Soundcloud, as well as Stubborn God Productions Page on Facebook. Heck, you might want to visit the Gauntlet's Page on Facebook as well. Till next time.