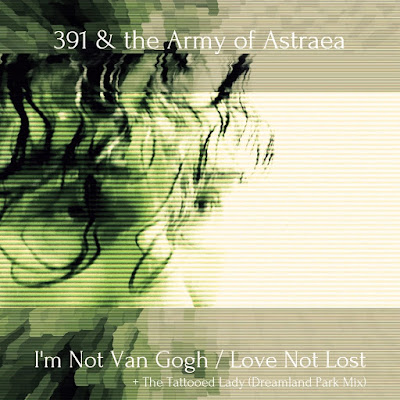 Hello my fellow Gauntletarians, I know it's been quite a while, and as such I've been working on a very wordy sociopolitical post as well as a mixology installment to upload really soon. But in the meantime, it just so happens that I recently finished mixing (at least as much as I can stand it) a new 391 & the Army of Astraea three song Extended Play Single.

Unlike many of 391's earlier digital releases this single is not Industrial-Electronic or Soundtrack work, but instead is in the Alternative Folk-Rock / Singer-Songwriter vein of things. Titled "I'm Not Van Gogh" / "Love Not Lost (Live)" + "The Tattooed Lady (Dreamland Park Mix)", this vocals & guitar-driven trio of ditties have been in the works for quite a while, and contains elements that reach as far back as 1988.

Interestingly, all three cuts on this extended play are composites of either old lyrics with new music, or new lyrics with old music, or additional tracks added to existing recordings made a couple of years ago. Thematically they're also all over the place, with the title track standing as a lyrical coping mechanism for the vagaries of the writing process, the second track lodged in the middle as a lovelorn ballad, and the last tune noticeably summoned from 1920's retro-kitsch.

Anyway, I hope you enjoy these songs, and hopefully those to come. Feel free to let me know what you think (hopefully nicely), and obviously, you are very welcome to follow the 391 & the Army of Astraea page on Bandcamp and / or the Stubborn God Productions page on Soundcloud, and to like and subscribe to the Nevekari Enterprises YouTube channel as well as the Gauntlet of Balthazar, Stubborn God Productions, and Nevekari Enterprises pages on Facebook, and of course, Nevekari's home page.

Thanks as always. Till next time.