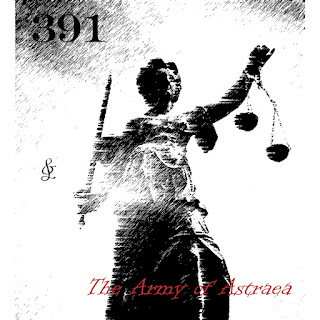 Well, hi there! It's time once again for the Gauntlet of Balthazar's BandCamp hosted 391 & the Army of Astraea Industrial / Electronic Music Give-Away program. Usually there is some (intentional) delay between the release of a piece on BandCamp itself and when it gets posted here, but in light of the fact that August has been a slightly slimmer month in regard to posts than July, I thought it might be nice to finish out the month musically, in keeping with the (mostly) general timbre lately. This one is called "Caustic Euphoria", and as I put it on the BandCamp page, it attempts to capture the space in-between (the caustic and euphoric, that is).

Saying that, I'm sure that the Gauntlet will be back to its usual hi-jinks soon enough; mixing political polemic with art, sound, film and writing critique, product reviews for music DAWs and Apps (yes, that's new), and shameless self-promotion of my work with our award-winning screenplay writing entity, Nevekari Enterprises. The latter, FYI, will include the release of a series of short films (our first new film issues in a few years) beginning this coming Halloween with a trilogy of horror vignettes that will doubtlessly all find an embedded home here on the Gauntlet amid the chaos.

So, please stay tuned for posts 75-100 and the Gauntlet's rapidly approaching first anniversary on the web.