From the Writer's Studio: Conspiracy Theories and the Myth of Osama bin Laden

As a writer I absolutely adore conspiracies, and occasionally, conspiracy's mutant cousin - the conspiracy theory. A "plot" working in the background of the story, of almost any kind, whether originated by a vast organization, or reflecting a few with shared interests, can move the narrative of a script or novel forward almost like nothing else.

According to Wikipedia's definition on the subject, ..."A conspiracy theory is an explanation of an event or situation that invokes a conspiracy without warrant, generally one involving an illegal or harmful act carried out by government or other powerful actors. Conspiracy theories often produce hypotheses that contradict the prevailing understanding of history or simple facts. The term is a derogatory one.

According to the political scientist Michael Barkun, conspiracy theories rely on the view that the universe is governed by design, and embody three principles: nothing happens by accident, nothing is as it seems, and everything is connected. Another common feature is that conspiracy theories evolve to incorporate whatever evidence exists against them, so that they become, as Barkun writes, a closed system that is unfalsifiable, and therefore "a matter of faith rather than proof".

I have deduced that my personal affection for conspiracies stems from a three-fold cause. Firstly, the obvious literary utility that I mentioned above. Secondly, the acceptance and awareness of conspiracies unite us as humans, by the fact that we accept that there are many organizations that we can be innately excluded from, based on such identity issues as race, religion, social and political peer groups. Thirdly, that it is an historical consistency that there have been, and always will be, ploys engaged by someone somewhere, whose actions and ultimate goals elude us completely.

Saying this, I personal perceive that I have a very high bar for what I qualify defines "a legitimate conspiracy". By legitimate I mean than there is indeed someone, or a group, whose vested interest makes their involvement in a questionable event extremely suspect.

So, let's take a look at some of my favorite "tin foil hattery", and gauge the likelihood of them passing actual conspiracy muster. 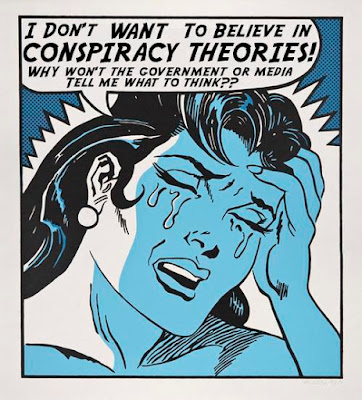 In my opinion, the grandfather of all conspiracies, and quantifiable conspiracy theories, must be the Kennedy assassination. JFK's assassination stands as the archetype of all modern conspiracies and conspiracy theories, and makes the plot hatched and executed by Booth and his Confederate confederates to kill Lincoln appear so straightforward in comparison as to make it look like child's play. Just in sheer volume of documentation and analysis, everything about this case is questionable, and every provided answer, ushers a new series of vexing queries. I expect that this confusion was built in, or at least played into, by whoever was / is ultimately responsible for the murder. Was it the Russians? the Cubans? the Mafia?, the CIA?, actually Lee Harvey Oswald acting solo?, or was it Lyndon Johnson?; Kennedy's Vice-President, and immediate successor, who, by Sherlock Holmes' standards, had the most to gain from JFK's removal, and thus, should stand as the most likely culprit.

Unlike the Kennedy assassination, I see no real incontrovertible proof that the Apollo 13 moon landing was a hoax. Since the proponents of this theory present what seems to me to be subjective and conjectural, and lacking concrete facts, I deny their claims that the moon landing was a fabrication directed by one of my film heroes, Stanley Kubrick. Nice try though.

Onto a big one, 911. What can we say about the fall of the twin towers that hasn't already been said? Many scientific facts have been presented to challenge the accepted version, and seem to support that this most horrible terror incident was "an inside job". I must say that the moment I heard of the event, that fateful Tuesday morning, the first thought that crossed my mind was, "Oh, I hope that it wasn't us".  This was very different from my reaction to the earlier attempt to bring the towers down in 1993, when I immediately was taken with a sense that the attempt was organized by the blind Jersey City jihadist Sheikh Rahman, who was later arrested for just that crime.

As a unilateral statement, I do not believe in any Dan Brown-esqe, Templar derived, global conspiracy theory. This extends to any Merovingian "Jesus" bloodline claims, the existence of the Illuminati as envisioned by conspiracy theorists, or Masonic control of national governments.

Needless to say, I also find the notion of a worldwide "Jewish conspiracy" absolutely ridiculous. If Jews were so in control, of anything, then why would there be such a thing as a poor Jew?, and why, oh why would they have allowed their ancient state to be crushed by the Romans with 85% of the population slaughtered? Why would they accept virtually non-stop persecution over the ages, followed by global marginalization, topped off with another massive genocide? This makes no sense, and the tin foil hat brigade who wish to believe in this Anti-Semitic fantasy are forced to resort to harping on the huge financial success of a single Jewish banking family, the Rothschild's.

To keep with economic organizations, I am highly suspect of the Bilderberg group, but, for all we know, they are just a fraternal organization of corporate fat cats and old money entrepreneurs who get together to commiserate about their shared love of flower arranging. There is not a shred of proof that pegs the Bilderbergs as an effective control organization any more than the John Birch Society, Bohemian Grove, or for heaven's sake, the Shriners.

But their are two conspiracy theories that I do believe in. The first is the United Nations agenda to eliminate national governments and to groom their organization into the sole governing body on earth. I can almost hear the Leftists and positive futurists poised to attack this as false, or defend it as an actually admirable goal, but I think it's pretty clear that this qualifies as a conspiracy and not just theory, since the organization has stated their goal obliquely, of not explicitly.

Lastly, I would like to touch on the poster boy of global Islamic terror,  Al Qaeda's Osama bin Laden. I am sure that Osama was indeed a disaffected Saudi rich kid who became attracted to the fundamentalist movement. I am sure that he led his group in military operations against coalition forces in Afghanistan, but, beyond all of that something is rotten in Denmark. On the eve of US actions in Afghanistan and Iraq, in response to the 911 attacks, (though neither nation had anything to do with it), we knew Osama to be living at his compound outside of Peshawar, Pakistan. In my opinion, the only thing more idiotic than invading Iraq in the first, and second place, was President Obama's withdrawal from Iraq, which created a power vacuum which allowed for the emergence of a Sunni extremist insurgency which soon coalesced into ISIS. Regardless of what one thinks about President Trump, he went on record repeatedly, sharing my opinion in regard to both tactical blunders.

So, what was Obama to do with the middle east? His virtue signaling nature made it so that he needed to appear to his devotees as a man of peace. After all, he did get the Nobel Peace Prize while conducting five wars. I expect that in retrospect a more frank future will confess honestly that he was clearly gifted that award as a token for being the first African-American president elect - which was absolutely a racist move by people who care more about appearance than actual results, which I would say should include something like, I don't know, MAKING PEACE SOMEWHERE!!

To appease the left, President Obama had to show his middle east muscle obliquely, and this he did, with 20,000 drone strikes, all the while orchestrating a drastic troop withdrawal to please both sides of the aisle. But, he had to get, more personal. Reagan had Gadafi and the Ayatollah Khomeni, Bush and Bush Jr. had Saddam Hussein, and Obama had Osama. But, there was one small problem - Osama's appearance had changed in every clip Al Qaeda released. He was clearly ill and not improving. Something had to be done fast, and so, a secret mission was hatched, and a squad was recruited to "take him down".

This "manhunt" led to a military op on the same compound he had been "hiding at" for the last decade. His body was supposedly recovered from the wreckage, but a decision was made to quickly bury him at sea, all the time with not one frame of photo documentation! Add to it that the "zero dark thirty" team were soon after killed in action seems like an amazing Jack Ruby-esqe coincidence.

As Obama touted his great achievement, all I could think was, "where's the body?". We were allowed to see Saddam, a leader who t,hough he was a brutal secular, and yes Socialist, dictator, kept his national from factional sectarian violence for decades, and kept Iranian power in check as well. Anyway, we were allowed to see him executed by the Kurdish authority on the nightly news, but in respect to Osama bin Laden, why couldn't bring ourselves to verify his capture and death? The line there is suddenly presented as such would have just been indecent. This to me points to the fact that he most likely had been long deceased at the time of the mission, and all that followed was a conspiracy cover-up.

I know that by now I've swung far more into pure politics than most "From the Writer's Studio's" post updates, but seriously, I don't think you couldn't write conspiracies this botched into a script. Everyone would say that they're not believable. But the sad truth is that most people in the real world believe the obnoxiously overt farce of Osama bin Laden's demise as bona fide. Then again, the more we study history, and these conspiracies and conspiracy theories, failed or successful, we are apt to learn what not to do in our writing, and how to better improve as literary creators. And that, friends, can never be a bad thing.

Email ThisBlogThis!Share to TwitterShare to FacebookShare to Pinterest
Labels: From the Writer's Studio, Politics, Text