From the Writer's Studio: "Yes, Virginia, the Bechdel Test Does Go Both Ways!" - Feminist vs. Egalitarian Screenwriting

I've touched on this subject before on the Gauntlet, but I must say that it's an issue that never fails to present itself again and again. This is probably due to the fact that rather than focusing on the artistic merit of gender diversity in film, the political agenda of third stream feminists has walked hand-in-hand with leftist-globalism, and has pervasively influenced the media, and ergo, most people's perception of gender inequality. This in turn has encouraged many to approach gender related matter in films with, let us say, kid gloves, terrified of losing the lucrative female consumer demographic. In my opinion, I expect that this conformity to political correctness, and the safety of the status quo, only serves to undermine the initially well-meaning parameters of the Bechdel test as it was first conceived to apply to script work.


In case you are unaware, the Bechdel test, or Bechdel-Wallace test, was created in the mid-1980's, and was designed to gauge sexist content (against women) in screenwriting so it could be objectively measured. The rule primarily operates on a percentile base, specifically relating to the amount of female characters in the script or film, and more importantly, the content of their dialog. Often, but mostly not explicitly stated, the elasticity of the criteria moves past the art itself and into the real world, encompassing practical, behind the camera issues, such as, "is the writer, director or producer of such and such a film female?"

According to Wikipedia: "...the Bechdel Test, sometimes called the Mo Movie Measure or Bechdel Rule is a simple test which names the following three criteria: (1) it has to have at least two women in it, who (2) who talk to each other, about (3) something besides a man. The test was popularized by Alison Bechdel's comic Dykes to Watch Out For, in a 1985 strip called The Rule. For a nice video introduction to the subject please check out The Bechdel Test for Women in Movies on feministfrequency.com."

As a writer, and I hope as a good one, I demand of myself the capacity to create characters of either gender or sexual orientation, as well as any race or ethnic group, or religion or creed. I understand that in the past female screenwriters had a hard go of it a male dominated industry, and that often male writers have presented female characters as one-dimensional archetypes supporting the male lead rather than as the fully fleshed out people they deserved to be in the world of film story. I grasp that the problem of literary sexism continues to exist in some smaller ways, but the goal here is to create quality writing, yes? Not to empower an over-arching revenge ploy or victimization narrative, right?

We, as creators, want to produce the best work possible, and in the modern world, the best way to do so is to not be "sexist" or "feminist", but rather, to be "egalitarian", and treat all characters as equally important to the structure of the plot and interpersonal relationship hierarchy within the realities we have created.

But perhaps, I am "man-splaining" too much. 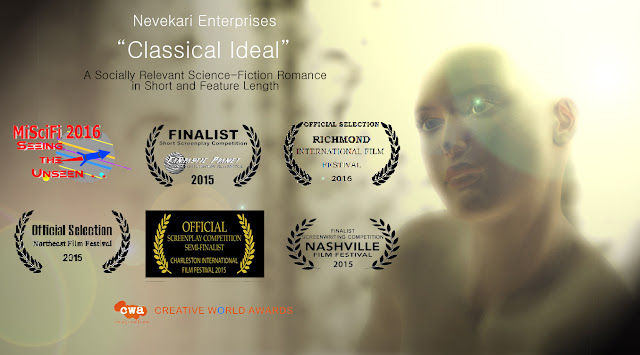 I once described our (Nevekari Enterprises) eight time awarded script "Classical Ideal" as feminist. But upon much reflection, and some major revisions, I feel that it is indeed now a truly egalitarian work. Classical Ideal chronicles the slow evolution of Lilly Goslicki, who has just awakened from a medical procedure designed to "reboot" her genome after a dreadful road accident.

The Log-Line reads: In the near future a woman awakens to find that she has been transformed into an ideal version of herself - the only catch, her memory of the past has been obliterated. Manipulated by a culture driven by vanity and unreasonable expectations, she struggles to find what she has lost.

To me, Classical Ideal is a great un-produced work, and the script will one day emerge as a great, and philosophically meaningful film, if I may say so without sounding as if I am bristling with hubris. But I have to admit, the more I thought about its place as a feminist  script, the more I realized I was engaging in reverse sexism, against my own gender!


This was not because it failed the Bechdel test, but more so, because Classical Ideal inverted the test and failed its male characters, who clearly spent the majority of their screen time talking about the dominant female characters. Since the protagonist and major antagonist are both female, this may not seem like much of an issue. Or is it?


According to the main page of www.passthebechdeltest.com the criteria for reversing the Bechdel test has only peripherally entered the feminist mind.

"What about the reverse Bechdel Test? When the under representation of men on film is a problem, we can talk about this. At the moment a reverse test is not relevant or useful. That said, there is some very limited research on the reverse stats available. Some imprecise calculations were done here by Reddit user celacanto, and even with simplified assumptions over 90% of films are estimated to pass the reverse test."

Absolutely poppycock! To deny it exists, when I have a work in hand that fulfills the concern, is only as repugnant as questioning its "usefulness". I also find it interesting and rather telling that the author here has referred to the issue as the "representation of men on film". Thus, even in their description they have chosen to negate content in preference to numerical visual gender representation.

This reverse sexist thinking can even be seen on the international film festival and script competition circuit, where there are certain feminist festivals that exclusively welcome films made by women. In some cases these films may not even feature a female character, and, ironically, it is not even a requirement that these films pass the Bechdel test. One must admit, it is no hard task to picture a  male writer pondering if he should even bother entering his feminist script into a feminist focused competition, out of fear from being "disqualified" by virtue of genitalia vs. content.

Add to it that we have seen many major films where women played a hefty hand in the story craft, such as the Hunger Games series, but where the script completely can not pass Bechdel muster. Katniss Everdeen spends a trilogy of films torn over her one hunky beau, and her damaged beau. She never truly develops her own political identity, but instead sleepwalks to other characters instruction. Aside from her one observation that the rebellion is as corrupt as President Snow, she is more than willing to go back to the country with the winning contender for her heart and start pushing out the pups.

Look, I'm not saying that their is no place for a woman to express an overt traditionalist bent, and by all means we need same gendered characters to talk to one another about the other sex. It's part of the natural way we interact as humans of either gender with the rest of the world. It's also one of the ways a writer can relate internal feelings through exposition which approximates naturalistic character interaction and dialog. It's called "confessional", and without this element, I don't think the entire genre of Romantic Comedy could even exist. Regardless, even in these stereotypes, we can find a diversity of character types. There can be indecisive males and demure females, but where we see the reverse sexism of the industry present itself fully is not only in the work of women screenwriters, but maybe more so from male "feminists" attempting to virtue signal to the feminist, and female, segment of society.

A perfect example where this is overt is probably best illustrated by the recent  re-make of the film "Ghostbusters". In the film, the paradigm is virtually flipped, with three male white scientist characters substituted for female versions. However, the producers could not resist going that one step further into mishominy, as I coined the man-hating equivalent of misogyny in my word of the day feature right here, or you'd like, the equally newly coined feminist "misandry", they had to throw in one more element to not just balance the scale, but to denigrate men as a gender. In the original, and to its credit, while their were few female characters they were fully fleshed out. This includes the secretary character, Janine Melnitz, played by Annie Potts, who had a distinctly skeptical and practical side, and physically was, well, a bit of nerd, and far from the typical image of the sexist plaything many secretaries were depicted as in yesteryear. However, our male secretary in the new outing, is played by the hunky Chris Hemsford, and is pretty much a vacuous "mimbo".

"Girl Power" is one thing, but when any victim identity makes the pressing for equal rights, or just taking pride in their identity to desiring revenge in order to balance scales that can never be truly balanced, simply because we can't re-write and undo the past, this becomes sheer fallacy.

While this pattern is part and parcel of pretty much all leftist thought, in the long run victim and revenge narrative helps no one, particularly the "oppressed group" in question. Far from downtrodden, women in our society are arguably in control, at least socially. The pay gap has been proved to be relative to occupational choice, and has been debunked by a Harvard feminist professor. Women in first world nations are not oppressed, and in many ways they possess more cultural power than their male counterparts. At the very least, even the most ardent third stream feminist would be forced to admit that women in first world nations possess all of the legal rights as males. Obviously there is still work to be done in nations like Saudi Arabia, etc., etc., but right here, right now, revenge screenwriting just creates more animosity and division between different identity groups, the classes, and the genders, and perhaps more to the point of this post, it creates bad writing. And that is something we all, as creators and consumers, shouldn't have to stand for.

Email ThisBlogThis!Share to TwitterShare to FacebookShare to Pinterest
Labels: From the Writer's Studio, Nevekari Enterprises, Text