From the Writer's Studio: The Vexing Chasm of Formatting and Brain Speed Differential

I write fast, really fast, and since the advent of smart phones and social media, I think my once endless scrawls of chicken scratch note pads have become clearer, more concise, and have benefited overall from the option of frequent revision and end up edited many more times than was possible for a work jotted down in pen, or even cranked out an old school typewriter with and "erase ribbon". After all, nowadays we can alter even after the fact, as I often do here on the Gauntlet - publishing a post, and then going back into it several times whenever I happen to notice an error or two.

It's a problem of diligence I expect.

I think that we all, writers or not, can accept the need for text of whatever sort to be grammatically correct, to not display sloppy typos, or boast misspellings galore. I know that as a multiple-awarded screenwriter I get much more roasted by friends when I let a misplaced apostrophe fly in a facebook thread rant. I mean, I know I WILL HEAR something like: "Hey, I thought you were a writer, man." But, I still do it, and it seems that every once in a while, even when trying my best, a few glitches in the Matrix slip by me, as I assume they do to pretty much everyone else as well. 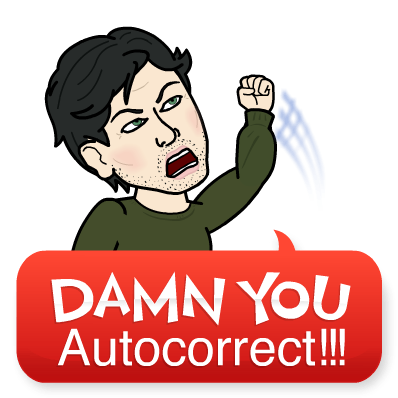 As I said, I write fast, which probably has to do with a conditioned hyper-kinetic element lodged somewhere in the right side of my brain, which is complicated further by the fact that the human mind is forced to filter out the grand majority of sense based information which heads our way pretty much non-stop from alpha to omega. Otherwise, we would be completely overwhelmed and be "not functional". Thus, our brains make do with what attention we can spare, and what percentage of information available to us at any given time. We can make heads or tails of large passages of text that is almost word soup, and still be able to suss out, by a process that is known as psycho-linguistic cognition, "word shape", which is the opposite of the "shape of letters".

From the Brain Sciences Unit of Cambridge University on-line, and citing Dr. George Rawlinson of the Psychology Department of the University of Nottingham. In an unpublished PHD thesis in 1976, Rawlinson laid out the significance of letter position in regard to word recognition, and I expect that just the first two lines alone convey his point demonstrably.

It deosn't mttaer in waht oredr the ltteers in a wrod are, the olny iprmoetnt tihng is taht the frist and lsat ltteer be at the rghit pclae... it doesn't matter in what order the letters in a word are, the only important thing is that the first and last letter be at the right place.

Now, I'm not trying to totally pass the buck here, and blame my identification as "Mr. Typo" on some innate condition. I'm just trying to put it into perspective.

I must admit that I am much more of a creator than a nit-picker, and I am a million more times interested in the curve of the story and the meaning behind a work than to let a stray error ruin it for me. Likewise, if the prose is beautiful or the descriptive or dialog is gut-wrenching, I'm not the one to focus on that colon which should have been a semi-colon. But, saying all this, my best advice for anyone who is trying to write their  first great novel, script, etc., is to learn all of the rules, and at least try to shake out the bugs. If worst comes to worst there are software programs like Celtx and Final Draft to help you with the layout and neatness on the page. But, auto-correct can only go so far, so for God's sake get someone, or many someones, who have eyes for it, to look over your stuff with a fine tooth comb.

I'm not promising that if you read up on formatting, dedicate yourself to scouring it line by line, and roping in every friend and relation you have, that you will not find a lost typo on your hundred-and-fiftieth revision. You probably will. But as with story and dialog, the craft of being a writer, or being any sort of artist, is a goal of always improving across the board, often in imperceptible increments.

If you are committed to the process of gradual improvement, and take it upon yourself to make words like "revision" and "editing" synonymous with "writing", then the one thing I can promise is that your work will be better perceived by a public and industry who are far too eager to slam the door in your face for any excuse they can find.

Till next time - Captain Typo...away!